Liverpool didn’t lose the hope in the Valverde deal 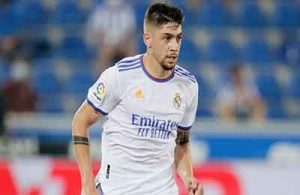 According to press reports, Liverpool did not lose hope to signing Real Madrid player Fede Valverde.

The Spanish newspaper “AS” reported that Liverpool was planning to make a new offer for the Real Madrid star, after an offer worth 85 million pounds was rejected.

Valverde presents exciting levels with Real Madrid, and raised his goals score to 5 this season, when he scored against Atletico Madrid (2-1) on Sunday, in the Spanish League competitions.

Valverde feels comfortable in the midfield or the back center , but he is currently occupying the right wing position in the Carlo Ancelotti’s plan.

The “AS” added: “Liverpool coach Jurgen Klopp is a big fan of Valverde’s versatility, which prompted the Reds to feel the pulse of Real Madrid with a huge bid at the end of the last transfer period.”

It concluded: “But the Royal Club officials found that the move in the last hour of the transfer window to include one of the team’s stars is humiliating.”