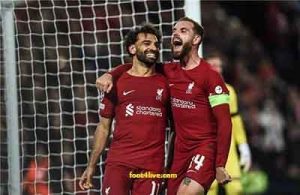 Liverpool won an important victory against Rangers (2-0) on Tuesday evening, in the third round of the first group of the European Champions League.

Trent Alexander-Arnold scored in the 7th minute and Mohamed Salah (52 from a penalty kick) scored the two goals for Liverpool.

Liverpool raised its score to 6 points in second place, 3 points behind leaders Napoli, who beat Ajax (6-1) at the same time, while Rangers remained free of points in the last place.

Liverpool coach Jurgen Klopp changed the team’s playing style to 4-2-3-1, as he involved Uruguayan striker Darwin Nunez as a spearhead in front of the trio of Mohamed Salah, Diogo Jota and Luis Diaz, and Jordan Henderson cooperated with Thiago Alcantara in the midfield, while the back line was from The quartet of Alexander Arnold, Virgil van Dyck, Joel Matip and Costas Tsimikas.

On the other hand, Rangers coach Giovanni van Bronckhorst resorted to the 5-4-1 method, with the back line James Tavernier, Conor Goldson, Ben Davis, Leon King and Borna Parisic, and on the wings Malik Tillman and Ryan Kent, and John Lundstram with Stephen Davis in the middle The stadium, and Alfredo Morelos was alone in the lead.

Liverpool’s start to the meeting came quickly, as Salah went from the right side, before passing to Jota, who passed the ball over the cannon Davis to Nunez, who saved McGregor’s attempt in the second minute.

Alexander Arnold opened the scoring in the seventh minute, with a direct free kick that passed over the human wall and landed in the goal.

Diaz advanced the ball from the middle of the field, before firing from the edge of the penalty area next to the far post in the 13th minute, and two minutes later, Salah received a pass from Nunez before directing a brilliance shot from McGregor to keep it away.

Kent fired a powerful shot into the Liverpool goal in the 19th minute, and defender Davis stopped a shot from Alexander Arnold in the 23rd minute.

Henderson directed a pass over the defenders to Nunez, who broke the offside trap, before trying to drop the ball over the goalkeeper who was on the lookout for him in the 34th minute.

Diaz passed two players from the left side towards the middle, before firing a creeping shot that McGregor easily controlled in the 36th minute.

Salah got rid of Kent, before sending a perfect pass to Nunez, but the goalkeeper saved the latter’s attempt with his legs in the 41st minute, and two minutes later Jota passed the ball elegantly between two players to Nunez, but McGregor returned to deprive the Uruguayan striker of scoring.

The referee awarded a penalty kick in favor of Liverpool, after Diaz was fouled by King, and Salah executed the kick successfully in the 52nd minute.

Then goalkeeper McGregor prevented Liverpool from adding the third goal in the 59th minute, when he skillfully blocked Jota’s shot.

The rhythm began to drop a little after the second goal, so Roberto Firmino and Fabinho entered the place of Jota and Henderson in the Liverpool squad.

Liverpool came close to adding the third goal in the 74th minute, when Nunez got the ball on the right side, and passed to Diaz, who tried to follow it into the goal to no avail.

Tsimikas took a corner kick, his teammate Matip rose, but his header went a little far from the goal in the 84th minute, then Rangers launched a rare attack when substitute Sakala was alone with goalkeeper Alison Becker and hit a ball, which Tsimikas kept away from before crossing the goal line in the 85th minute.