Macron to French players: The world dances with joy after every goal 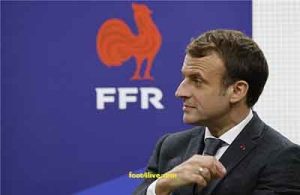 Emmanuel Macron, President of France, expressed his happiness at his country’s qualification for the 2022 World Cup Final.

France became the first to qualify for the round of 16 in the World Cup in Qatar, after its victory against Denmark (2-1), today, Saturday, in the second round of the group stage of the World Cup.

Macron published, through his official account on the social networking site “Twitter”, a picture of the French national team, and commented on it a brief comment and said: “The blue.”

Macron said in another post through his official account on the social networking site “Facebook”: “In a world facing a series of crises, it is our duty to preserve the sportsmanship, as it is a space for peoples to converge on universal values.”

He added, “The FIFA World Cup is being held for the first time in the Arab region, and witnesses tangible changes. The State of Qatar has made remarkable efforts to make the event a success and continues to do so, and it can count on our support.”

And he continued, “The color of the world dances with joy after every goal you score. So, let’s dance with joy together! And once again, “Come on, blue.”

France is the last team to win the World Cup, in its last edition in Russia 2018, when it beat Croatia 4-2.