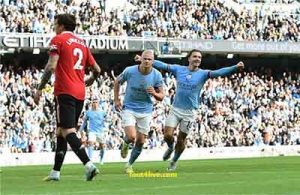 Manchester City swept its guest Manchester United 6-3 in the derby, in the match hosted by the Etihad Stadium today, Sunday, at the top of the ninth round of the English Premier League.

With that result, Manchester City raised its score to 20 points in second place, while Manchester United’s balance froze at 12 points in sixth place.

City started the match strongly and almost opened the scoring early, after McTominay cleared a ball inside the area in front of De Bruyne, and Al-Balahiki fired a powerful ball, De Gea excelled in stopping it, to be followed by Bernardo with a shot that hit the United defense.

City managed to open the scoring already in the eighth minute, after Bernardo sent a cross from the left side, followed by Foden with a direct shot from inside the area that went into the net.

United’s first attacking appearance came in the 15th minute, by Sancho paving the ball on the edge of the area for Eriksen, who in turn hit a weak ball that Ederson easily caught.

City got a violation on the borders of the area in the 18th minute, which Gundogan executed with a direct shot that hit the post.

City’s advance towards the United goal continued, after Bernardo sent a cross from the left side in a shot similar to the first goal, followed by Foden with a direct shot in the 21st minute, but his ball passed next to the post this time.

De Bruyne tried to surprise De Gea with a ground shot from the edge of the area in the 29th minute, but his ball went weak next to the post.

De Bruyne returned to the attempt with a powerful shot from outside the area in the 32nd minute. De Gea shone in a corner kick.

City managed to score the second goal in the 34th minute, after Haaland crossed a corner kick, hitting a header that Malacia failed to clear before it crossed the goal line.

And Halland quickly added the third goal in the 37th minute, after he followed a cross from De Bruyne inside the 6-yard area, shooting a direct ball into the net.

Fernandes looked for United to restore the atmosphere of the match, with a powerful shot from outside the area in the 39th minute, which Ederson caught.

United continued to collapse, adding City to the fourth goal in the 44th minute, after Haaland sent a cross from the left side, followed by Foden with a direct shot from inside the area that went into the net.

City started the second half strongly, with a shot from Foden from inside the area in the 46th minute, which was saved by De Gea.

And Manchester United reduced the difference in the 56th minute, with a powerful shot from Anthony from outside the penalty area, and Ederson netted.

Haaland received a pass inside the area from Bernardo in the 64th minute, to hit a powerful ground ball that just passed next to the post.

Halland scored the hat-trick in the 65th minute, after he followed a cross-legged cross into the area, with a direct shot that hit De Gea’s net.

The City Goals Festival continued with the addition of the sixth in the 73rd minute, after Halland passed a magical intersection to Foden inside the area, to hit the latter with a powerful ball that hit De Gea’s net, also on the hat-trick.

United scored another goal in the 84th minute, after Fred fired a powerful ball from inside the area, Ederson saved it, and Martial followed it with a header that made the net.

United got a penalty in the 90th minute, when Martial was obstructed by Cancelo, and Martial successfully executed the kick with a shot to Ederson’s left, ending the match with City’s 6-3 victory.