Man United is satisfied with a double against Tottenham 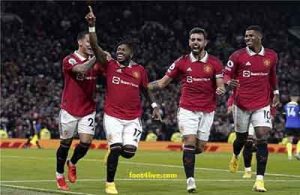 Manchester United achieved a convincing victory at the expense of its guest, Tottenham Hotspur, with two goals without a response, this evening, Wednesday, in the match hosted by Old Trafford in the English Premier League, 12th round .

United scored the double of Fred and Bruno Fernandes in the 47th and 69th minutes.

With that result, Manchester United raised its score to 19 points in fifth place, while Tottenham’s balance froze at 23 points in third place.

early error
The match began with a fierce attack by the hosts, and Lloris made a mistake in climbing to clear a ball in the seventh minute, so Anthony shot from outside the area trying to take advantage of his exit, but the French goalkeeper was confused in addressing the ball that then went out to a corner kick.

And then Farid fired a missile from the borders of the area, this time Lloris shone in removing it to a corner kick.

United almost opened the scoring in the tenth minute, with an arc shot from Anthony from the edge of the area, hitting the post.

And Fred sent a magical intersection to Rashford inside the penalty area in the 22nd minute, to single out Ploris and hit a powerful ground ball, the French goalkeeper brilliance in addressing it.

And United got a foul in the 23rd minute, which Fernandes executed with a direct shot, which Lloris sent away to a corner kick.

Loris continued to shine in response to United’s attacks, after Dalot sent a cross from the right side, followed by Shaw with a shot at the bird inside the area, which the French goalkeeper kept away to a corner kick in the 24th minute.

United’s advance towards the Tottenham goal continued, with a missile from Casemiro in the 29th minute from outside the area, and it just passed near the post.

Son appeared with a shot from the edge of the area in the 34th minute, it went away from the goal.

And in the 45th minute, Kane received a ball inside the area to hit a strong ball, which was saved by De Gea, to end the first half with a goalless draw.

United opened the scoring early in the second half in the 47th minute, with a shot from Fred from the edge of the area, which collided with Davis and changed its direction to enter the net.

And United almost added the second goal quickly in the 49th minute, after Rashford manipulated the Spurs defense, before firing a powerful ball from inside the area, which Lloris starred in addressing it.

Tottenham responded after that in the 50th minute, with an arc shot from Kane on the edge of the area, touching Martinez and passing a little bit next to the post.

Anthony looked to add the second goal, with a ground shot on the edge of the area in the 55th minute, which passed next to the post.

Kane missed a real chance to adjust the result in the 68th minute, after receiving a cross from Perisic inside the 6-yard area, to set aside Badi Gea and hit a ball, the Spanish goalkeeper brilliance in addressing it.

The punishment came immediately after United added the second goal in the 69th minute, with an arc shot from inside the area that went into the net.

Bruno tried to add the third goal in the 73rd minute, with a shot from outside the area, but Lloris caught it.

United’s attacking advance continued, with a missile from Rashford inside the area, and Lloris shone in diverting it to a corner kick in the 74th minute.

From that corner, Dalot rose to a cross, shooting a header that went over the crossbar, and the following minutes did not witness anything new, and the meeting ended with United winning with two goals without a response.