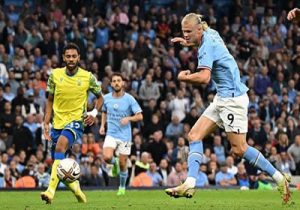 Norwegian Halland led his Manchester City team to a landslide 6-0 victory over its guest, Nottingham Forest, on Wednesday, in the fifth round of the English Premier League.

Halland scored a hat-trick in the 12th, 24th and 38th minutes, alongside Julian Alvarez’s “double” in the 65th and 87th minutes, and Joao Cancelo in the 50th minute.

Manchester City coach Pep Guardiola relied on a 4-3-3 game, and Stones stood next to Robin Diaz in the back line, with the support of full-backs Kyle Walker and Joao Cancelo.

Rodri played the role of the center player, while Gundogan and Bernardo Silva moved in front of him, behind the attacking trio, Phil Foden, Julian Alvarez and Halland.

Nottingham resorted to a 3-4-2-1 method, and the back line consisted of Joe Worrall, Shekho Kouyate and Scott McKenna, and played on both sides, Nico Williams and Lodi.

The duo of Louis O’Brien and Ryan Yates were stationed in the midfield, while Remo Froller and Morgan Gibbs-White moved behind striker Brennan Johnson.

And Man City started the match in an offensive way through a long-range shot from Gundogan, which moved away from the goal in the third minute.

And goalkeeper Dean Henderson saved his goal from a dangerous opportunity in the seventh minute, when he blocked Alfrez’s attempt after Gundogan’s cross that bounced off Lodi.

Halland opened the scoring in the 12th minute, when Foden passed a ball inside the penalty area, the defense tried to keep it away, but it turned towards the Norwegian striker, who netted it from a short distance.

A dangerous chance came for Forest in the 18th minute, when Williams raised a ball from the right towards the far post, followed by Lodi with his head into the side net.

Halland managed to score his second personal goal in the 23rd minute, when he passed a ball to Foden, who interrupted the defense’s attempt, to return the ball to the former Dortmund striker, who put it in the empty goal.

Man City scored a goal in the 29th minute, through Stones, but the referee’s banner canceled it for offside, and goalkeeper Henderson cut a dangerous cross from Halland in the 34th minute.

And Halland quickly scored his third goal in the 38th minute, when Cancelo raised a ball from the left, Foden headed it to the Stones, who in turn headed it header to Halland, who followed it into the net.

Alvarez ended the first half when he shook Forest’s goal post with a long-range shot in the 44th minute.

Only 5 minutes passed from the second half, until Man City managed to score the fourth goal, when Cancelo got a pass from Silva, to fire a powerful shot from outside the penalty area, which hugged the upper corner near the goal.

Palmer and Riyad Mahrez entered the Man City squad instead of Rodri and Foden, and Henderson saved Silva’s shot in the 60th minute.

Alvarez made his name on the list of top scorers in the 65th minute, when Mahrez controlled a long pass with his head, before passing a cross towards the Argentine, who put it in the net from a difficult angle.

De Bruyne and Sergio Gomez participated in the City squad instead of Cancelo and Haaland, and Mahrez controlled Gundogan’s long pass, faced the goalkeeper and hit the post in the 71st minute.

After the entry of young defender Rico Luis in place of Stones, the game tended to calm, with the visitors surrendering, and Alvarez failed to reach Foden’s pass in front of goal in the 84th minute.

Alvarez scored his second personal goal in the 87th minute, when he got a rebound from the defense, to hit the top corner of the goal, to end the meeting with a 6-0 victory for Man City.