Manchester City regain its balance with three goals against Brighton 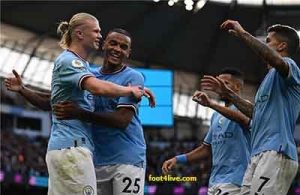 Manchester City regained the tone of victories, defeating its guest Brighton 3-1 at the Etihad Stadium, on Saturday evening, in the English Premier League, 13th round.

City’s goals was scored by Erling Haaland (22-43) and Kevin De Bruyne (75), while Brighton’s only goal was scored by Leandro Trossard (53).

With that result, City raised its score to 26 points in second place, while Brighton’s balance froze at 15 points in eighth place.

The first attempt in the match came in favor of Brighton in the 11th minute, with a pass error from Ederson, Welbeck caught the ball and tried to shoot a lob, but his shot went wide of the goal.

Manchester City opened the scoring in the 22nd minute, after Ederson sent a through ball, so Halland was unique with goalkeeper Sanchez and succeeded in evading him, before firing easily into the net.

City almost added the second goal in the 32nd minute, after Grealish paved the ball to De Bruyne next to him in the penalty area, and the Belgian hit a powerful ball that Dunk sent away to a corner kick.

From that corner, Rodrygo rose to a cross, shooting a header that went wide of the goal.

Brighton returned to form the danger again in the 38th minute, after Welbeck rose to a cross from a corner kick, shooting a header that went over the crossbar.

City got a penalty in the 41st minute, after Bernardo was obstructed by Dunk, the referee needed to return to the VAR technique to calculate it.

Halland successfully kicked in the 43rd minute, with a powerful shot to the right of the goalkeeper, to end the first half with City’s lead with two goals without a response.

City missed a real chance to add the third goal at the beginning of the second half in the 52nd minute, after De Bruyne passed a magic ball to Mahrez inside the area to be unique to Sanchez, and hit a ground ball that the goalkeeper brilliance in addressing.

And the punishment came from Brighton to reduce the difference in the 53rd minute, with a powerful shot from Trossard from the edge of the area and into the net.

Laporte rose to a cross from a foul by De Bruyne in the 62nd minute, shooting a header that went to the side of the post.

Brighton looked to score the equalizer in the 67th minute, with a shot from McAllister from outside the area, which went over the crossbar.

Laporte almost scored the third goal for City in the 72nd minute, by ascending a cross from a corner kick, shooting a distinctive header that just passed next to the post.

Trossard went very quickly from the left side, until he reached the penalty area and hit a powerful ground ball, Ederson starred in removing it to a corner kick in the 73rd minute.

De Bruyne fired a shot of mercy at Brighton, scoring the third goal in the 75th minute with a powerful shot from outside the penalty area, and the following minutes did not witness anything new, and the meeting ended with City winning (3-1).