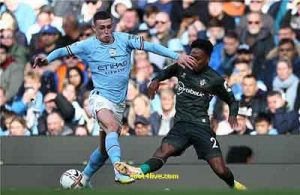 Manchester City swept its guest Southampton 4-0 on Saturday evening at the Etihad Stadium in the 10th round of the English Premier League.

Manchester City raised its score to 23 points to temporarily rise to the top, while Southampton’s balance froze at 7 points in 16th place.

Manchester City posed the first danger, when Cancelo sent a cross that Mahrez received inside the area, and hit a powerful ball that Pazono brilliance in addressing.

City returned to try again with a cross from Cancelo from the left side, followed by Mahrez with a shot at the bird from inside the area, which went over the crossbar.

City missed a real chance to open the scoring, after Foden sent Binia to Haaland, who was alone with the Southampton goalkeeper and hit a ball that hit the post.

Algerian star Riyad Mahrez followed a ball away from the Southampton defense on the borders of the area, hitting a ball on the bird that went far from the goal.

City opened the scoring with a kick from Cancelo from the left side, during which he manipulated Prause, before firing a powerful ball from inside the area into the net.

And Manchester City tried to add the second goal, with a powerful shot from its glowing star Phil Foden from inside the area, as goalkeeper Pazono brilliance in addressing it.

And City managed to add the second goal, with a magical pass from De Bruyne to Foden inside the area, to be unique to the goalkeeper and hit an elaborate lob that slammed into the net.

Foden searched for adding his second goal in the match, with a shot from inside the area, which went away from the goal, so that the first half ended with the progress of City (2-0).

Manchester City started the second half strongly, with a shot from Portuguese star Bernardo Silva from inside the area, but it passed next to the post.

City managed to add the third goal, after Rodrygo sent a cross into the area, followed by Mahrez with a superb shot on the bird that hit the net.

Halland sought to put his name on the list of registered players, when he received a cross-legged cross inside the area by Foden, hitting a direct ball that just passed next to the post.

Halland managed to add the fourth goal, with a cross from Cancelo inside the area, followed by Halland with a direct shot that passed through the goalkeeper’s feet and into the net.

Grealish almost added the fifth goal, after receiving a pass from Haaland, hitting a powerful ball that the Southampton goalkeeper shone in to push it away to a corner kick.

And in a rare attacking appearance for Southampton, Berod hit a ball from outside the penalty area that went wide of the goal, ending the match with City winning by four goals.