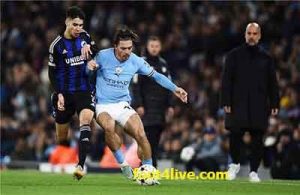 Manchester City swept its Danish guest Copenhagen 5-0 at the Etihad Stadium, on Wednesday evening, as part of the third round of the group stage of the European Champions League.

Citizens continued to lead the seventh group with the full score with 9 points, and Copenhagen’s balance froze at one point at the bottom of the group.

The English team opened the scoring early in the seventh minute, after Cancelo sent a cross from the right side, followed by Haaland with a direct shot from inside the area that went into the net.

Mahrez then paved the ball for Gundogan on the borders of the region in the 19th minute, to hit the German directly with a ground ball that was saved by Grabara, followed by the Algerian star with a powerful shot from outside the area, which Grabara managed to catch.

Halland received a pass from Grealish inside the area in the 23rd minute, to hit the Copenhagen goalkeeper’s brilliance missile in stopping it.

The city’s advance towards the Copenhagen goal continued, with a curved shot from Grealish from inside the area in the 24th minute, which was pushed away by Grabara to a corner.

Grabara continued to shine in front of City’s dangerous chances, after he starred in stopping a powerful shot from Grealish from inside the area in the 32nd minute.

Halland managed to add the second goal immediately after Gomez hit the bird from outside the area, which was saved by Grabara, paving the ball against the Norwegian, who easily scored in the net.

City’s third goal was not delayed, after Gomez hit a powerful ball from outside the area in the 39th minute, hitting Favreau’s foot and then hitting Khosholava’s foot and into the net.

The ball paved the way for Bernardo inside the area in the 44th minute, to be alone with Grabara, but he strangely hit the top of the crossbar, ending the first half with a 3-0 lead for City.

And City began the second half with an arc shot from the borders of the region through Gundogan in the 47th minute, which was caught by Grabara.

Substitute Cole Palmer tried to write his name on the list of scorers, with an arc shot from outside the area, which the Copenhagen goalkeeper shone in the 51st minute.

City got a penalty in the 54th minute, after Laporte was obstructed by Stamenic, and Mahrez successfully executed it with a shot to the right of the goalkeeper, scoring the fourth goal.

City returned to form the danger again in the 71st minute, after Grealish passed through Alvarez inside the area, and the latter hit a ball that hit the post.

And in a rare attack for Copenhagen, Mukayru was alone with Ederson, firing the Brazilian goalkeeper’s brilliance in stopping it in the 75th minute.

From that corner, Lund rose to a cross, shooting a header that just passed next to the post.

City added the fifth goal in the 76th minute, with Mahrez penetrating the right side of the penalty area, passing the ball to Alvarez next to him, who easily put it in the net.

Grealish exchanged the ball with Gundogan inside the area in the 79th minute, hitting a curved ball that just passed next to the post.

The ball continued, Grealish’s stubbornness, after Mahrez paved the ball for him on the borders of the area in the 83rd minute, to hit a direct ball that just passed next to the post, and the match ended with a 5-0 victory for City.