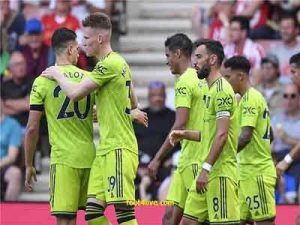 Manchester United continued its revival and beat its host Southampton with a clean goal, on Saturday evening, in the opening round of the fourth round of the English Premier League.

Bruno Fernandes scored the game’s only goal in the 55th minute, to raise the Red Devils their score to 6 points, in sixth place temporarily, while Southampton’s balance froze at 4 points in thirteenth place.

Manchester United coach Eric Ten Hag relied on the 4-2-3-1 method, using the same formation he relied on in the victory over Liverpool (2-1) last week.

Raphael Varane stood alongside Lisandro Martinez, in front of goalkeeper De Gea, in the depth of the back line, with the support of full-backs Diogo Dalot and Tyrin Malacia, while Christian Eriksen participated alongside Scott McTominay in the midfield, and the trio of Antonio Ilanga, Bruno Fernandez and Jadon Sancho, behind striker Marcos. Rashford.

On the other hand, Southampton coach Ralph Hasenhuettl resorted to a 4-2-3-1 method as well, where the back line of Kyle Walker Peters, Armel Bella Kochap, Muhammad Salisu and Musa Genipo, in front of goalkeeper Pazono, and Romeo Lafia cooperated with James Ward Bruce in the middle. And Che Adams played the role of the outspoken striker, in front of the trio of Joe Aribo, Mohamed El-Younissi and Adam Armstrong.

The first chance of the meeting came in the tenth minute, when Al-Younissi fired a shot from the edge of the United penalty area, Malacia stood in front of him and pushed it away.

A deep cross from the right reached Armstrong, who tried to head his head towards the near post, but goalkeeper De Gea easily controlled the ball in the 13th minute.

United missed an incredible opportunity to open the scoring in the 19th minute, when Fernandes’ header rebounded from the defense, to reach Ilanga, who shot before goalkeeper Pazono saved his attempt, and the ball rebounded to Eriksen, who stopped the defense in front of his close shot.

Armstrong rose to a cross over full back Dalot, but his header crossed the goal in the 29th minute, and Adams followed a corner kick, to reach the ball to Bella Kotschap, who hit the United crossbar from close range in the 31st minute.

Armstrong made a good effort on the left side, before passing to Adams, who tried to get rid of Martinez before hitting a weak ball that De Gea easily controlled in the 32nd minute.

De Gea denied Southampton the opening goal in the 38th minute, when he blocked Armstrong’s attempt after a pass from Al-Younissi.

At the beginning of the second half, McTominay got the ball from the right side and hit it in the narrow corner to be saved by the goalkeeper in the 49th minute.

Ilanga made a distinguished effort on the right side, and exchanged the ball with Fernandez to enter the penalty area, before stumbling against Bella Kuchap in the 52nd minute.

United finally managed to open the scoring in the 55th minute, when Dalot sent a mid-high cross from the right, followed by the unmarked Fernandes “on the bird” into the net.

The referee rejected the claims of the Southampton players for a penalty kick, claiming that the ball touched McTominay’s arm in the 60th minute.

Armstrong got rid of his sergeant skillfully on the left side, before he raised a cross, which was met by Aribo with a powerful header that was blocked by De Gea, to bounce the ball to Walker Peters, who also headed it over the goal.

Portuguese star Cristiano Ronaldo entered the United squad instead of Sancho, and almost made an immediate imprint when he got a pass from McTominay, but Gennebo cut his attempt in the 70th minute.

Casemiro entered the United squad for the first time since his transfer from Real Madrid, instead of Ilanga in the 80th minute.

The host pressed with all his might to equalize in the last minutes, and the defense stopped in front of substitute Mara’s scissors in stoppage time, ending the match with a United victory (1-0).