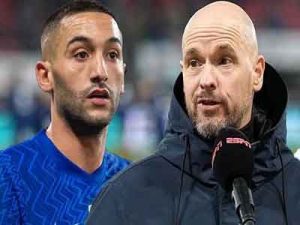 Several reports claimed that Ziyech was left out of the accounts of German coach Thomas Tuchel, Chelsea coach, this season.

According to The Sun, Manchester United are ready to make an official offer to sign Hakim Ziyech.

She pointed out that Eric Tin Hag, the coach of the Red Devils, was the one who asked Man United officials to settle the deal, and the administration is ready to sign Ziyash, if Chelsea’s requests are not high.

It is noteworthy that Hakim Ziyech moved from Ajax to Chelsea in 2020, for 37 million pounds.