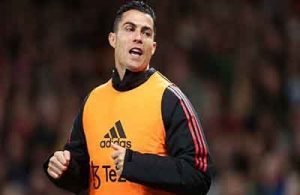 Manchester United issued a statement today, Thursday, regarding the crisis related to its star Cristiano Ronaldo, regarding his reaction in yesterday’s match against Tottenham.

In the 89th minute, with Ronaldo not entering as a substitute player, the cameras were caught, as the Portuguese star left Old Trafford, before the end of the match.

After the meeting, Tin Hag indicated that he would look into the matter, after the session that would bring him together with the Portuguese star.

Man United issued a statement, on their official website, confirming that Ronaldo will not be in the squad list to face Chelsea, next Saturday in the Premier League, In order for the rest of the players to prepare for the match, it is imperative that they focus on each other.

Press reports indicated that Ronaldo told his coach Tin Hag that he did not want to enter as a substitute in the last minutes.

Speculation increased about Ronaldo’s future in the team, due to his lack of participation, as he participated only twice this season in the Premier League, in the loss against Brentford, and the goalless draw with Newcastle.