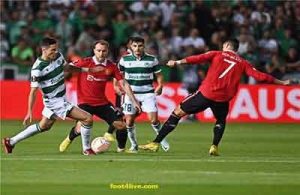 Manchester United regained its balance defeating Omonia Nicosia of Cyprus 3-2, today, Thursday, in the match hosted by the New GSB Stadium, as part of the European League competition, group stage’s third round.

With that result, Manchester United raised its score to 6 points in second place in Group E, while Omonia is bottom of the standings without a score.

The first attempt in the match came in the sixth minute for United, with a ground shot from Sancho on the border of the area, which passed next to the post.

United almost opened the scoring early in the ninth minute, with a powerful shot from Ronaldo from inside the area, Fabiano starred in addressing it.

United returned to form the danger in the 15th minute, after Martinez rose to cross from a corner kick, shooting a header that went over the crossbar.

United missed a real chance to score in the 18th minute, after Ronaldo passed a magic ball to Fernandes inside the area, to be unique to goalkeeper Fabiano, and hit a falling ball that hit the crossbar.

Anthony appeared in the 27th minute, with a distinctive curved shot from the edge of the area, Fabiano starred in removing it to a corner kick.

Omonia opened the scoring in the 34th minute, after a big mistake from Malacia, through which Bruno seized the ball from the midfield, and ran until he reached the borders of the area, passing the ball to Ansari, who singled out Badi Khaya and hit the ball into the net. The first half ended with the Cypriot team advancing with a goal without to reply.

With the beginning of the second half, substitute Rashford tried to adjust the result early, with a curved shot from the left side of the penalty area in the 46th minute, it went over the crossbar.

And United got a foul in the 52nd minute, which Fernandes executed with a direct shot caught by Fabiano.

And United managed to adjust the result after that, with a powerful shot from Rashford from the edge of the area that went into the net.

United’s advance towards Omonia continued, with a powerful shot from Eriksen from the edge of the area in the 55th minute, passing a little near the post.

Anthony hit a curling ball from the right side of the penalty area in the 57th minute, it went to the side of the post.

United added the second goal in the 63rd minute, after Rashford paved the ball for Martial on the edge of the area, to hit the Frenchman with a powerful ground ball that hit the net.

Omonia returned to form the danger in Deqiouq 68, after Bruno received Peña inside the area, and tried to shoot a lob, but De Gea caught it easily.

United responded in the 69th minute, after Eric Ersken sent a cross cross to Ronaldo, free of control, inside the area, to hit the latter with a direct ball that went over the crossbar.

The ball continued with Ronaldo in the 78th minute, after Dalot passed the ball to him inside the area in front of the empty goal of his goalkeeper, but the Portuguese hit the post strangely.

United fired the bullet of mercy by adding the third goal in the 84th minute, with a magical pass from Ronaldo to Rashford in the 6-yard area, so the English striker scored the ball easily into the net.

Omonia did not give up by adding the second goal in the 85th minute, after Kakoli passed the ball inside the area to Panayoto, who shot it directly into De Gea’s net.

Farid tried to add his name to the list of registrants with a powerful shot from the borders of the area in the 88th minute, Fabiano starred in addressing it.

Dalot sent a ground cross into the area in the first minute of stoppage time, followed by Rashford with a powerful shot that Fabiano saved, ending the meeting with United winning (3-2).