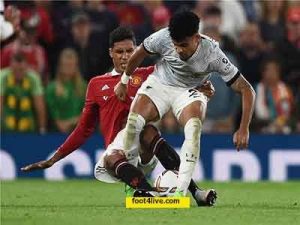 Manchester United breathed a sigh of relief, after beating its guest Liverpool 2-1 on Monday evening, at the end of the third round of the English Premier League.

This is the first victory for Manchester United after two consecutive losses, to raise his score to 3 points, and leave the last place heading to the fourteenth place, a point ahead of Liverpool, who is in the sixteenth place.

Manchester United started the match as a striker, and the referee awarded him a direct free kick, executed by Christian Eriksen in the human wall in the seventh minute, before Anthony Ilanga wasted the opportunity to advance in the tenth minute, when he hit the post after he was alone after a pass from Bruno Fernandes.

Liverpool responded in the 15th minute, when Mohamed Salah dribbled his sergeant on the right side, before passing in front of the goal to Roberto Firmino, but the defense cut the ball in time.

Only moments passed until United managed to open the scoring, when Ilanga exchanged the ball with Eriksen, before passing inside the penalty area to Jadon Sancho, who got rid of a beautiful artistic move from James Milner, before he shot comfortably to the right of goalkeeper Alisson Becker.

Liverpool winger Luis Diaz made his way from the left side, before passing the ball to Harvey Elliott, who returned the ball to him, but the Colombian shot in the middle of the defense’s harassment by the side of the goal in the 18th minute.

Sancho passed a through ball towards Marcus Rashford, who tried to single out goalkeeper Alisson, but the defense cut the ball from him in the right time in the 19th minute.

The referee awarded a free kick in favor of Manchester United after blocking Ilanga, Eriksen skillfully executed it towards the far post, and Allison rose to take it away in the 25th minute.

Liverpool’s performance began to improve a little, and Salah passed the ball to captain Jordan Henderson, who shot it wide of the goal in the 29th minute.

Elliott hit Manchester United’s defense in the 35th minute, and Liverpool almost equalized in the 40th minute, when Milner’s ball rebounded from Fernandes, hitting the body of defender Lisandro Martinez from the goal line, before the latter scattered it away.

Anthony Martial entered the Manchester United squad instead of Ilanga between the two halves, and Liverpool full-back Trent Alexander-Arnold took a corner kick, towards Salah, who blocked directly from outside the penalty area towards Al Mudarat in the 50th minute.

In the absence of Liverpool’s defense, Manchester United scored the second goal through Rashford, who broke the offside trap by receiving Martial’s cross, to be unique and put the ball to the right of Alisson in the 54th minute.

In the 56th minute, Manchester United defender Raphael Varane received the ball inside the Liverpool penalty area, to return it back to Rashford, who shot it smartly crawling towards the far post, but Alisson miraculously saved it.

The Brazilian Fabinho entered the Liverpool squad in place of Henderson, and headed a corner kick by his colleague Robertson, but goalkeeper De Gea easily controlled his attempt in the 57th minute.

Fred entered the United squad instead of Sancho, and Fernandes received a yellow card for claiming to fall into the Liverpool penalty area.

Rashford dribbled with more than one player and advanced the ball before firing it over the Liverpool goal in the 76th minute, and two minutes later, De Gea controlled Firmino’s easy header.

Salah managed to reduce the score in the 81st minute, when he followed into the net a shot by substitute Fabio Carvalho and goalkeeper De Gea saved it.

In the last minutes, Ronaldo, Donny van de Beek and Aaron Wan-Bissaka entered the United squad, without anything new, with Alisson addressing Martial’s loneliness in overtime.