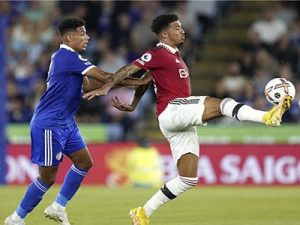 Manchester United rise to fifth place with a goal in Leicester
Manchester United achieved their third consecutive victory in the English Premier League, at the expense of its host, Leicester City, 1-0, on Thursday evening, at the end of the fifth round.

Jadon Sancho scored the only goal of the match in the 23rd minute.

Manchester United raised its score with this victory to 9 points, to rise to fifth place, while Leicester City is at the bottom of the list with a single point.

Manchester United coach Eric Ten Hag did not make any adjustments to his starting lineup, relying on the 4-2-3-1 method, as Lisandro Martinez stood alongside Raphael Varane deep in the back line, with the support of full-backs Diogo Dalot and Tyrell Malacia, and Christian cooperation Eriksen with Scott McTominay in the midfield, in the move of the trio Anthony Ilanga, Bruno Fernandes and Jadon Sancho, behind striker Marcus Rashford.

On the other hand, Leicester City coach Brendan Rodgers resorted to the 4-1-4-1 method, where the back line consisted of James Justin, Wilfred Ndidi, Jones Evans and Luke Thomas, and Bubakari Somare stood as a fulcrum, and was present on the wings, James Madison and Harvey Barnes. While Yuri Telemanu and Kiernan Dusbury Hull centered in the midfield, Jamie Vardy played the role of the outspoken striker.

The start of the match came a little slow, and Fernandes’ shot rebounded from Justin to turn into a corner in the eighth minute.

A series of smooth short passes resulted in Eriksen reaching the ball, who fired a long-range shot that was controlled by goalkeeper Ward in the 11th minute.

Leicester City waited until the 21st minute, to threaten the United goal, when Madison passed the ball to Dusbury Hull, who fired a shot that goalkeeper David de Gea did not find difficult to control.

United managed to open the scoring in the 23rd minute, after a counter-attack sent the ball through Fernandes to Rashford, who passed it on a golden plate to Sancho, to elude the latter goalkeeper Ward and put the ball into the goal.

Eriksen hit the goalkeeper’s place in the 27th minute, and Varane cut a smart through pass before reaching Vardy in the 34th minute.

Defender Evans stopped Sancho’s shot in the 36th minute, and Rashford passed his sergeant Ndidi, before sending the ball to Sancho, who hit the goalpost, but his attempt bounced from Just to the goalkeeper’s hands in the 37th minute.

With the beginning of the second half, Leicester seemed more active, and the referee awarded him a free kick, which Madison executed elegantly from over the human wall, but De Gea brilliantly removed it in the 51st minute.

Casemiro entered the United squad instead of Ilanga, to turn the method of play to 4-4-2, and Madison got a new free kick, but this time he hit the human wall in the 67th minute, before Cristiano Ronaldo entered instead of Sancho.

Leicester’s control of the game did not actually lead to a threat to United’s goal, which in turn relied on counter-attacks, Erskine almost took advantage of one of them after a cross from Ronaldo, but defender Evans stood in front of his attempt.

Ronaldo almost scored a fantastic goal in the 83rd minute, when he met Dalot’s cross towards the far post, with an amazing scissor, that bounced off the ground and continued its path next to the post.

In the last minute, Leicester’s substitute Kelechi Ihyanacho came close to scoring Haf in his team’s goal, had it not been for the goalkeeper Ward’s presence who saved the situation.