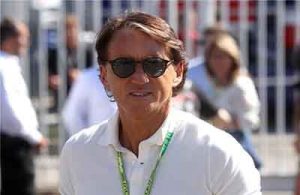 The Italy coach Roberto Mancini confirmed that England’s technical condition is better than the Azzurri, ahead of their meeting on Friday in the European Nations League.

Mancini told “There is always enthusiasm before those matches, I am not worried, they are in better technical condition, but we also have enthusiasm and are able to play a good match,” .

He added “England is one of the best countries in the world that is full of talent, they have many players in the attack line, it will be a difficult match,” .

Manchetti referred to his team’s success in winning the Euro 2022 title on penalties at the expense of England, and stressed that facing the Three Lions in the European Nations League reminds something wonderful.

And he added: “Italy-England is a great classico for football. Playing against England reminds us of something wonderful… You have to show the team spirit that has always distinguished our team. You have to play well, and playing simply is always the best thing.”

Regarding the injury of Sandro Tonali, he said: “Tonali did not train with us, we are trying to recover for the Budapest match, but he does not have a good feeling, and I think he will return to Milan.”

He continued: “I have to adapt to the players I have, this is what we did when building the team 4 years ago, it depends on the players we have, now the style of play can change.”

Mancini concluded “Qualifying for the next round of the Nations League will give us some joy, given the pain we will feel in December (not participating in the World Cup),” .

Hungary leads Group C in the Nations League with seven points, in front of Germany (6), then Italy (5), and finally England with two points.