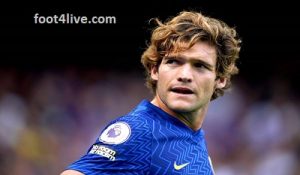 Marcos Alonso news: will move to Barcelona within the next few hours.

Barcelona is close to signing Spanish left-back Marcos Alonso, Chelsea’s left back, in order to support the team, during the current summer transfer period.

And Thomas Tuchel, Chelsea’s coach, had previously announced that his club had agreed to Alonso’s departure, after he asked to leave the club this summer.

According to Spanish journalist Gerard Romero, who specializes in the transfer market, Marcos Alonso news that he will move to Barcelona within the next few hours.

Romero indicated that Barcelona agreed with Chelsea to include Alonso for 8 million euros, in addition to the variables.

He added that Alonso would sign a two-year contract with Barca, with the option to extend for an additional year.

However, Romero confirmed that Barcelona will not announce the contract with Marcos Alonso until after the contract reduction of defender Gerard Pique. the activation of the fourth lever, and then registration of the new deals that the club settled in the past weeks, have concluded.

Additional report that Alonso’s contract with Chelsea will expire in the summer of 2023.

You may like to read also: De Jong news: The player chooses his new club?