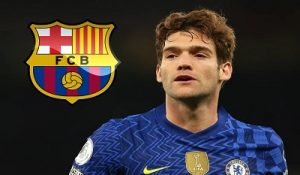 According to the Spanish newspaper, Mundo Deportivo:

Alonso bid farewell to the Chelsea staff after the team’s last training.

And the Spanish newspaper indicated that Alonso asked German coach Thomas Tuchel, the Blues coach, not to participate in the match against Everton, today, Saturday, in the opening Premier League, because of his willingness to move to Barcelona.

This came after Barcelona reached advanced negotiations with Chelsea regarding the inclusion of the Spanish full-back this summer.

It is reported that Alonso’s contract with Chelsea expires in the summer of 2023.

Barcelona is targeting the inclusion of Marcos Alonso in the current summer Mercato because there is no suitable alternative for his Spanish compatriot Jordi Alba.

You may like to read also: Arsenal win Crystal Palace 2-0

Do you think Marcos Alonso will be in Barcelona this season?

What is your opinion regarding this deal between Barcelona and Chelsea? Do you think Alonso is better than Jordi alba?