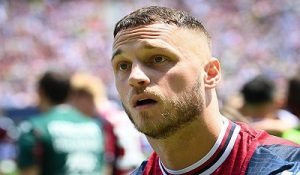 According to press reports, on Saturday evening, Manchester United is considering signing a well-known striker who has previously played in the English Premier League.

And the Italian newspaper, La Gazzetta Dello Sport, reported that Manchester United is putting Austrian international striker Marko Arnautovic among its options to strengthen its attack before the closure of the current summer transfer period.

This comes at a time of uncertainty surrounding the future of the Red Devils’ attacking star Cristiano Ronaldo, who wants to leave the club this summer, in search of a new opportunity to participate in the Champions League.

Arnautovic, 33, has scored 15 goals in 34 games with the Bologna team, since arriving in Italy at the beginning of last season.

Arnautovic joined the Italian team, after 3 years spent in China with the Shanghai team.

The Austrian international, who played 102 caps for his country, signed with the Chinese club after periods in the English Premier League with Stoke and West Ham, where he scored 22 goals in 65 matches.

Arnautovic is now ready to return to the premier league, where the same newspaper indicated, “The player is open about the idea of ​​returning to the Premier League.