Mbappe’s imprint restores PSG to the top of Ligue 1 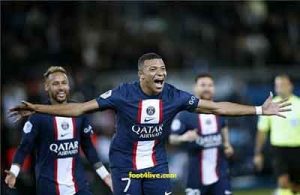 Paris Saint-Germain defeated Nice, with two goals, in the match that was held today, Saturday, in the Ligue 1, ninth round .

Lionel Messi and Kylian Mbappe scored the two goals for Paris in the 28th and 83rd minutes, while Gaetan Laborde scored the only goal for the visitors in the 47th minute.

Saint-Germain raised its score to 25 points, to regain the lead, while Nice’s balance froze at 8 points, in thirteenth place.

PSG played a different combination in all lines, with Mokelly next to Ramos and Marquinhos in the defense line, Bernat in the left front, and Fabian Ruiz in the middle next to Vitina.

The Parisian team dominated, but its biggest threat to the goal came from Messi’s set-pieces, who scored a superb goal with a shot into the left scissors of Danish goalkeeper Kasper Schmeichel.

Messi almost added a second goal, but Schmeichel pushed the shot away with great difficulty.

On the other hand, Nice coach Lucien Favre did not benefit from his stars Aaron Ramsey and Ross Barkley, but the guests saved themselves in the first 45 minutes.

Two minutes into the second half, Nice surprised the Paris giants with a equalizing goal, which was scored by Laborde after a perfect cross from Algerian right-back Youssef Attal.

His two runners quickly activated the ranks with two substitutions at once by the 58th minute, as Kylian Mbappe and Nuno Mendes replaced Ikitiki and Bernat, then Renato Sanchez in the place of Ruiz.

For his part, the Nice coach included the duo Kevin Thuram and Nicolas Pepe, in place of Ramsey and Ross Barkley.

The Parisian pressure resulted in a second goal scored by Mbappe, taking advantage of Nordi Mukele’s pass, after which Andy Delors took part in Laborde’s place.

In the last minutes, Pablo Sarabia and Danilo Pereira took the place of Messi and Renato Sanchez, who left the field injured, before his team succeeded in achieving a valuable and difficult victory.