Milan defeats Inter 3-2 in the derby 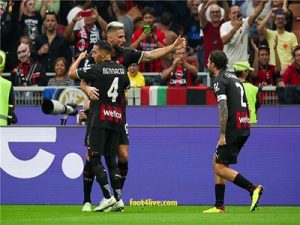 Milan turned the table on its counterpart Inter, to snatch an important victory (3-2), in the match that brought them together today, Saturday, at San Siro Stadium, in the framework of the fifth round of the Italian League.

With this victory, Milan raised its score to 11 points at the top of the standings, while Inter’s balance froze at 9 points in fifth place.

The first chance in the match was for Inter Milan, after a quick game that reached Parilla to pass to Dumfries on the right, who passed it towards the penalty area line to Brozovic, and the latter fired a missile that hit the foot of a Milan player and passed near the goal to a corner.

Milan’s response was not too late, and in the 15th minute, Liao passed a cross into the area, defender Bastoni tried to push it away to hit it with a header that hit the crossbar, but the referee awarded a free kick because of a mistake on Giroud.

The Rossoneri returned with a new opportunity after just one minute, after the ball reached Rafael Liao on the left flank, to launch a distinctive shot towards the goal, but Handanovic managed to keep it away from his goal.

In the 21st minute, Marcelo Brozovic scored the first goal of the match, after an excellent three-way game, after the ball reached Laotaro in the middle of the field, to pass it with the heel to Correa, who hit Milan’s defense with a pass in the depth to Brozovic, so that the Croatian singled out the goal and hit the ground ball into the net.

In the 28th minute, Liao equalized the score for Milan, after a fatal error from Calhangulu in passing, after he passed a wrong ball, Tonali managed to cut it to go towards the area and pass to Liao, who fired the ball into the net.

With Inter retreating after Milan’s draw, the Reds had a double chance within one minute, after Giroud passed the ball to Tonali to launch a shot that Handanovic managed to catch, to pass the goalkeeper and cut and bounce again from Theo, who fired a missile that passed over the Nerazzurri bar.

With the beginning of the second half, Theo Hernandez almost scored the goal for Milan, after a free kick was carried out from outside the area and hit one of the Inter players to pass into the area and Theo countered with a header that passed next to the left post of Inter.

In the 54th minute, Giroud doubled the score for Milan with a second goal, after a pass from the left side of Liao to Giroud, who hit a weak ball from among the three Inter defenders, into the net.

In the 60th minute, with Inter’s collapse, Liao hit the Nerazzurri goal with the third goal, after Giroud’s long ball passed to Liao, who passed through the Inter defense with ease and penetrated and shot a ground ball from within the six yards into the net.

Substitute Dzeko reduced the score for Inter in the 67th minute, after a cross from left-back Darmian, Dzeko met it with a sharp shot that hit Milan’s right post and went into the net.

goalkeeper Mainan starred and deprived Inter of the opportunity to adjust the result in the 70th minute, after a cross from the right side, Laotaro rose to it higher than everyone else and hit it with a header in which Mainan starred and sent it away for a corner.

And Mainan continued his brilliance and saved a new opportunity from the feet of Calhangulu, who fired a missile shot that almost went into a difficult corner, but Mainan brilliantly removed it for a corner.