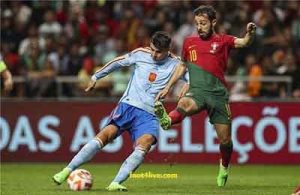 The Spanish national team won a fatal victory 1-0 against Portugal, on Tuesday evening, in the final round of the European Nations League group stage .

Alvaro Morata scored the only goal of the match in the 88th minute.

With this victory, the Spanish team raised its score to 11 points at the top of the group, while Portugal’s balance froze at 10 points in second place.

The match started, with a shot from Spain’s striker Morata in the second minute, past Portugal goalkeeper Diego Costa.

Cristiano Ronaldo, the star and captain of the Portugal national team, demanded the referee of the match to get a penalty kick, after a challenge from Spain goalkeeper Unai Simon with him inside the penalty area, but the referee did not award anything in the 22nd minute.

Portugal’s Ruben Neves hit a ball from outside the penalty area, and goalkeeper Unai Simon brilliantly saved it, in the 23rd minute.

Bruno Fernandez sent a missile shot from outside the penalty area, which touched the outer net of Simon’s goal in the 37th minute.

The first half ended in a goalless draw.

With the beginning of the second half, Cristiano Ronaldo took advantage of a mistake by Dani Carvajal and hit a powerful ball that Simon saved in the 47th minute.

And Carlos Soler, the Spanish national team player, sent a powerful ball that passed over Portugal’s goal in the 55th minute.

Morata received a through pass deep in the Portugal penalty area, and hit a ground ball that was easily grabbed by goalkeeper Diego Costa in the 71st minute.

And Morata hit a powerful ball that Costa saved and turned it into a corner in the 76th minute.

And Nico Williams, the Spain winger, hit a ball on the edge of the penalty area in the 84th minute, and Costa caught it easily.

Morata scored a fatal goal for the Spanish national team in the 88th minute, to give the victory and the three points to Matador and cross into the semi-finals.