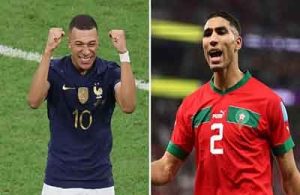 Arab and international fans will be on a date with a heavy-caliber match, on Wednesday evening, December 14, at Al-Bayt Stadium, where the Moroccan national team will meet its French counterpart, in the framework of the semi-finals of the Qatar World Cup 2022.

It is expected that the confrontation will be full of excitement and rivalry. The “Atlas Lions”, led by national coach Walid Rekragui, possess distinguished names, and the wonderful performance of the Moroccan national team during the group stage stage in the Qatar World Cup, and then the victory over Spain in the final price on penalties (3-0), after a goalless draw. Without goals (0-0) in the regular and extra time, and then beating Portugal (1-0) in the quarter-finals.

On the other hand, the French national team includes many distinguished stars, which helped the “roosters” top their group, then beat Poland (3-1) in the final price, and then cross England’s difficult stage in the quarter-finals with a score (2-1). The French team is technically led by national coach Didier Deschamps.

Morocco is seeking to achieve the football miracle by reaching the World Cup final for the first time in the history of African and Arab football, after the “Atlas Lions” became the first team from the brown continent to reach the semi-finals of the World Cup, and on the other hand, France is looking forward to booking the qualification ticket to the grand final in The world wedding in Qatar, and the attempt to defend its title, which it achieved in the last edition of the 2018 World Cup in Russia.

The match between Morocco and France is expected to witness many bilateral confrontations on the green rectangle, between players from both teams, who have performed impressively during the Qatar World Cup so far, which “winwin” highlights through the following lines.

Antoine Griezmann is one of the most important keys to playing the French national team during the 2022 World Cup. An important contribution to Deschamps’ squad, the Atlético Madrid midfielder has shown his creativity and ability to make good use of small spaces in attack.

Moreover, Griezmann contributed to France’s goals; Where he provided 3 assists in the World Cup Qatar so far, and he is the most cross-sending player in his country (34 crosses), and monitoring his movements around the edge of the penalty area is very necessary, and from here comes the role of the Moroccan star Sofiane Amrabat, who must be at the top of his focus, And on high defensive alert, if he intends to limit the danger of the French star.

During the past matches, Amrabat’s defensive instinct was remarkable; What helped the Moroccan defense keep its nets clean in 4 out of 5 matches played by the “Atlas Lions” in the Qatari World Cup so far, and the Fiorentina player is considered the most Moroccan player running in the 2022 World Cup (59.3 km), and we will see in the match between Morocco and France if he is a clerk. Will he succeed or not in stopping Griezmann’s danger?

Following the overthrow of Bosnian coach Wahid Halilhodzic, and Rakraki taking over technical responsibility for the Moroccan team, Hakim Ziyech returned to the Moroccan national team a few months before the World Cup in Qatar. And in the 2022 World Cup, the Chelsea star presented a wonderful image, and was one of the most important trump cards in the Moroccan squad.
During the World Cup in Qatar, Ziyash scored a goal and provided an assist, and he is the most among his teammates in trying to score on goal “8”. World Cup 2022 so far.

The France player showed his quality in the past matches, as he provided two assists, so Hernandez represents a winning card that must be watched by Ziyach when the “Atlas Lion” performs his defensive duty.

There is no doubt about Olivier Giroud’s impressive performance with the roosters during the World Cup in Qatar, where he scored 4 goals and contributed strongly to the rise of the French team to the semi-finals. One of the most important features of the Milan striker is his amazing finishing ability, as he has always proven that he is able to score from anywhere in the last third of the field, and providing him with enough space can be dangerous for the Moroccan national team.

Morocco’s defense lacked the services of its central defender, Nayef Akrad, during the recent confrontation with Portugal, and captain Roman Says was injured during the match. Therefore, it is expected that defender Javad Yamik will have an important role against France, after he did well in the past confrontations.

The Valladolid player has great defensive capabilities that appeared in the four matches he played in the 2022 World Cup, and Yamik must be on high alert if he intends to stop Jiro’s danger and prevent him from scoring in the World Cup semi-finals.

Among the upcoming bilateral confrontations in the Morocco-France match, the confrontation appears between Moroccan striker Youssef Al-Nusairi and French defender Raphael Varane, as both players appeared wonderfully in the previous matches of their teams in the Qatar World Cup.

Al-Nusairi scored two goals in the World Cup so far, and was distinguished by his continuous movements inside the penalty area, and his display of great capabilities in aerial conflicts; Thanks to his tall stature of “1.88 meters”, the player is expected to be controlled on set pieces by French defender Varane, who has 1.91 meters.
During the Qatar World Cup, the Manchester United defender participated in 4 matches, where Varane appeared in a distinctive way, and he must be at the top of his focus and monitor Al-Nusairi’s movements well, if he wants to reduce the danger of the Moroccan striker.

Another upcoming bilateral confrontation in the Morocco-France match, perhaps the fiercest, is between Moroccan right-back Ashraf Hakimi and his Paris Saint-Germain colleague, the brilliant French winger Kylian Mbappe.

It is considered binary
One of the most important weapons in the national teams of Morocco and France, and they know each other well because of their company in Paris Saint-Germain; So the one-on-one duel between them will be something to watch.

Hakimi was prominent in the five matches he played in the World Cup in Qatar with the “Atlas Lions” shirt, He was the best in his country’s national team, passing 228 and attempting 64 penetrations. Hakimi also provided an assist during the 2-1 victory over Canada in the first round.

On the other hand, Mbappe is the top scorer in the Qatar World Cup with 5 goals, and he is the most among the French players in attempts to score on the goal, “21 attempts,” and he also made two goals; What explains his great importance to coach Didier Deschamps’ battalion.. In the event that Hakimi succeeds in limiting the danger of Mbappe, the French national team will miss a lot of its offensive power, during the upcoming confrontation in the semi-finals of the 2022 World Cup.