Morocco vs Portugal (1-0): historic, heroic but so deserved 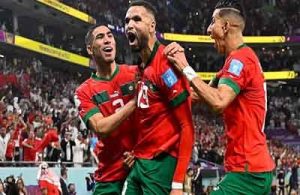 Morocco went to the end of its ideas to defeat Portugal this Saturday and become the first African selection to reach the semi-finals (1-0). Generous, talented, complete and modern, this team never flinched in a match where Portugal were astoundingly neutral. The Atlas Lions are in the last four and it’s deserved.

The Game: Another Perfect Plan

The trap was known. Croatia, Belgium, Spain had fallen right into it during previous matches, systematically colliding with the Moroccan defensive block without apparent flaw. In return, delicious ball exits, one-on-one and almost systematic incisive actions.
This Saturday, the plan of Morocco was known but it was interpreted with such brilliance that the Seleção das Quinas could never interfere in the course of history. First in 4-3-3, Walid Regragui’s men fell to 5-4-1 when defending their advantage on the scoreboard, obtained after a smoothly conducted first period. It held.

The players: a statue for amrabat, ounahi madly

They were all so heroic that it seems difficult to single out one. But Sofyan Amrabat continued on his absolutely stunning momentum by performing yet another remarkable match of self-sacrifice, intelligence and impact. Absolutely huge. In front of him, Azzedine Ounahi, who feasted in National last year, delivered a divine match, with wise dribbling, well-felt orientations and astounding technical mastery. Yassine Bounou, decisive, Sofiane Boufal, easy, En-Nesyri, in levitation, or El Yamig, impressive replacement for Aguerd, are also to be mentioned.

The magic of Ounahi, the blunder of Costa, the ball Cheddira: the tops and flops

On the Portuguese side, only disappointments, or almost. Apart from a stirring Bruno Fernandes, the Portuguese missed out. Joao Felix was unable to regain the influence he had seen against Switzerland, Gonçalo Ramos was ghostly while Ruben Dias suffered as rarely. As for Diogo Costa, author of a failed exit which is very expensive, we will have to forget this disappointing World Cup.

The x factor: the relaxation of “air Nesyri”

Was he inspired by Cristiano Ronaldo’s crazy relaxation against Sampdoria in 2019? Maybe he even jumped even higher. This Saturday, the Sevilla FC striker delivered Morocco with a whim you had to believe. In the duel with Diogo Costa, he simply flew into the sky of Doha to smash the most important goal in the history of Morocco and Africa in the World Cup.

How not to recall it: this Saturday, Africa put an end to a famine which had lasted too long. This Saturday, an African selection qualified for the last four of a World Cup. Before the Moroccans, Roger Milla’s Cameroon, Papa Bouba Diop’s Senegal or Asamoah Gyan’s Ghana had touched on this continental dream. Just reward after so many disappointments.

The question: but where will Morocco stop?

By force, it is no longer a coincidence, an anomaly or a simple accident of history. If Morocco is in the semi-finals, it is simply that it is one of the four best teams in this tournament. It is in any case the best defense, at least statistically, and it is not a dirty word. The Atlas Lions are hungry when it comes to defending a goal that is very well kept by Bounou. But they are also full of ideas when it comes to hurting their opponent with the ball.

There is something refreshing in seeing Ounahi, Boufal or Ziyech martyring their respective counterparts while respecting the collective idea put in place by Vahid Halilhodžić but sublimated by Regragui. In a World Cup obsessed with the future of the biggest stars in the game, Morocco reminded us that it is above all as a team that we can topple mountains.

So what’s next? A World Cup semi-final, already. With the idea that nothing should be prohibited. We do not put Belgium, Spain and Portugal out by chance. So England or France have no reason to break the rule.