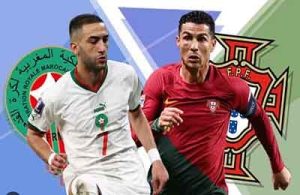 5 individual battles are expected in the Morocco Portugal match

Arab and international fans will be on a date with a heavy-caliber match, on Saturday evening, December 10, at “Al-Thumama” stadium, where the Moroccan national team will meet its Portuguese counterpart, in the framework of the quarter-finals of the 2022 Qatar World Cup.

The confrontation is expected to be full of excitement and rivalry. In view of the distinguished names that the “Atlas Lions” possess, led by national coach Walid Rekragui, and the wonderful performance of the Moroccan national team during the group stage of the Qatar World Cup, and after that the victory over Spain in the final price on penalties (3-0), after a goalless draw. Without goals (0-0) in the regular and extra time.

On the other hand, the Portuguese national team includes many distinguished stars, who helped “Brazil Europe” lead their group, then sweep Switzerland in the final price with a score of 6-1, and the Portuguese team is technically led by national coach Fernando Santos.
In the first round of the Qatar World Cup, the Moroccan national team took the lead in Group F with 7 points, after a 0-0 draw with Croatia, then beat Belgium 2-0 and Canada 2-1, respectively. On the other hand, the Portuguese national team came at the top of the group. Eighth with 6 points, after its victory (3-2) over Ghana, then superiority (2-0) over Uruguay, and finally the loss against South Korea (1-2), in an unexpected result, added to the rest of the major surprises witnessed in the current version. from the World Cup.

The match between Morocco and Portugal is expected to witness many bilateral confrontations on the green rectangle, between players from both teams, who have performed impressively during the Qatar World Cup so far, which “winwin” highlights through the following lines.

Bruno Fernandes has arguably been Portugal’s best performing player in the 2022 World Cup so far; Bruno’s contributions were important to coach Fernando Santos’ squad, and the Manchester United midfielder showed his creativity and ability to make good use of small spaces in attack.

Moreover, Fernandez contributed heavily to Portugal’s goals; Where he scored two goals and provided 3 assists in the World Cup Qatar so far, and monitoring his movements around the edge of the penalty area is absolutely necessary, hence the role of Moroccan star Sofiane Amrabat, who must be at the top of his focus, and on high defensive alert, if he intends to limit The danger of the Portuguese star.
During the past matches, the defensive intuition of Amrabat was wonderful, which helped the Moroccan defense to keep its net clean in 3 out of 4 matches played by the “Atlas Lions” in the Qatari World Cup so far, and we will see in the match between Morocco and Portugal whether Amrabat will succeed or not in stopping Dangerous Fernandez.

Hakim Ziyech proved that his return to the ranks of the Moroccan national team a few months before the World Cup in Qatar was necessary, after the overthrow of the Bosnian coach Wahid Halilhodzic, and Rakraki assuming technical responsibility for the team. And in the 2022 World Cup groups, the Chelsea star presented a wonderful image, and was one of the most important trump cards in the Moroccan squad.
During the Qatar World Cup, Ziyash scored a goal and provided an assist, and the Moroccan right wing in the Portugal match will be on a date with a bilateral confrontation with left-back Rafael Guerrero, who also appeared distinguished in the 2022 World Cup so far.

The Portugal player showed his quality in the past matches, scoring one goal and providing two assists, so Guerrero represents a trump card that must be watched by Ziyash when the “Atlas Lion” performs his defensive duty.

There is no doubt that Goncalo Ramos’ stunning performance in Portugal’s last match, scoring 3 goals in the 6-1 win over Switzerland, has given him the edge over Cristiano Ronaldo in the starting line-up for the Mariners.

One of the unique things about the Benfica forward is his impressive finishing ability, as he has proven he can score from anywhere in the final third, and enough space for him can be dangerous for Morocco.
Therefore, Moroccan defender Romain Sayes must be on high alert, if he intends to stop Ramos’ danger and prevent him from scoring in the match.

Sayess has high experience and great defensive capabilities, which contributed to Morocco scoring with a single goal during the 4 matches the team has played in the Qatar World Cup so far.

Another expected bilateral confrontation in the Morocco-Portugal match will bring together the Moroccan left winger Sofiane Boufal and the Portuguese right back Joao Cancelo, and this confrontation can be very influential in the final result of the meeting.

Boufal is considered one of Morocco’s most important offensive weapons, and in past matches it showed its high quality in penetrating competitors’ defenses. Thanks to his speed and high skill in dribbling, Cancelo’s task will be difficult to stop the dangerous player of his French team, Angers.
Cancelo is distinguished by good defensive capabilities, and his extensive participation in building the Portuguese game, and this appears in his being the owner of the most number of passes among the Portuguese players in the Qatar World Cup so far, with 215 passes, and the Manchester City player plays great offensive roles in the right front, and in all, It can be said that the confrontation of “Bofal to Cancelo” represents a bilateral duel that is worth watching in the upcoming Morocco-Portugal summit.

Among the upcoming bilateral confrontations in the Morocco-Portugal match, the confrontation appears between Moroccan striker Youssef Al-Nusairi and Portuguese defender Pepe, as both players appeared wonderfully in the previous matches of their teams in the Qatar World Cup.

Al-Nusairi scored a single goal in the Qatari World Cup so far, and was distinguished by his continuous movements inside the penalty area, and his display of skill.

large circles in aerial conflicts; Thanks to his tall stature of “1.88 m”, Al-Nusairi is expected to be controlled on set pieces by the 187-centimeter Portuguese defender Pepe.

Pepe confirmed during the World Cup in Qatar that age is just a number, and appeared in a distinguished way with “Brazil Europe”, and at the age of 39, Pepe managed to score the net during the Switzerland match, to be the oldest player to score a goal in the World Cup tournaments since Cameroonian legend Roger Milla, who scored At the age of 42, in the 1994 World Cup.