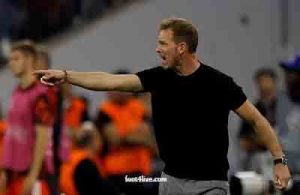 The Bayern Munich coach Julian Nagelsmann confirmed that his Moroccan player, Nassir Mazraoui, will be in the team’s starting lineup, during the match against Augsburg in the German League (Bundesliga), tomorrow, Saturday.

Nagelsmann said, in a press conference today, Friday, that Mazraoui started the Barcelona match, which took place last Tuesday in the Champions League, from the bench, and when he participated in the meeting, he gave “a good offensive performance, and also defended very well.”

He added, “He gave a great performance, and he had a lot of confidence in himself. He will start tomorrow’s match, and he can show his true strength.”

On the other hand, Lucas Hernandez, who scored the opening goal during the 2-0 win over Barcelona, ​​will be out for several weeks after suffering a thigh muscle tear, and he will also miss the two matches of the French national team in the European Nations League.

Nagelsmann continued: “Kingsley Coman and Bona Sarr are also absent. Dayot Obamecano will return to training alone, today, and he will be available to participate in the match.”

And he added: “Benjamin Pavard trained yesterday and is ready… It is very important to go to the international break, and you are the winner of the last match before it.”

Although Bayern won an important victory over Barcelona, ​​it lost the top spot in the German League, after drawing in three consecutive matches against Borussia Moenchengladbach, Union Berlin, the leaders, and Stuttgart.

“It’s going to be about working hard and playing amazing football,” Nagelsmann said in this regard. “We have to take advantage of the opportunities we create.”

He continued, “We are a little behind in the table, but we have gone through a good stage in terms of statistics, and we are ahead everywhere .. But we were expecting better results in the last three matches.”

And about his striker, Sadio Mane, he said: “He knows when he played well, and when he didn’t play (well) .. He will return to give his maximum .. He has complete confidence, and will score many goals.”

He concluded: “Ryan Gravenburch has played a few matches, and this is because of the competition, but he is doing a very good job. He is still a young player, and he needs to grow and play more.”