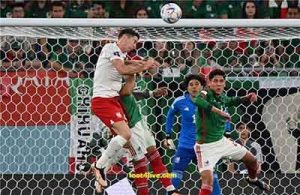 A goalless tie settled the Mexican national team’s match with its Polish counterpart, which brought them together at Stadium 974, this evening, Tuesday, in the first round of the group stage of the 2022 World Cup.

Robert Lewandowski missed a penalty kick for Poland in the 57th minute, missing an important victory for his country, and the match ended in a goalless draw.

With this tie, both teams scored one point to occupy the second and third places, behind the leaders of the Saudi team (3 points), while the Argentine national team is at the bottom of the Group C table without points.

The Mexican national team took possession of the ball at the beginning of the match, and in the fifth minute, Hirving Lozano kicked the ball into the right side after Kiyoor lost the ball. Lozano penetrated and passed a dangerous cross in front of the Polish goalkeeper, but Vega failed to follow the ball.

Vega almost advanced to the Mexican national team in the 26th minute, after an excellent cross from Herrera from the right, he rose to it higher than the Poland defender, and turned it with a header that passed along the left post of Chesney.

In the 44th minute of the first half, Jorge Sanchez, the right-back of Mexico, received the ball inside the penalty area from the right, to hit a powerful ball in a difficult angle, but Chesney shone and prevented a goal for the Mexican national team, and pushed it to a corner.

The first half witnessed a complete isolation of the Polish sniper, Robert Lewandowski, who did not appear completely during the events of the half.

In the second half, specifically in the 51st minute, the Polish defense dispersed a ball outside the area on the left side to find Lozano, who penetrated into the area and fired a shot at the goal, but it easily reached the arms of goalkeeper Chesney.

Lewandowski almost stung the Mexicans in the 54th minute, after a fatal mistake by the Mexico defender, who mistook the ball, and Zelinski passed the ball to Lewandowski, who fell inside the area after being blocked by Hector Moreno.

The referee awarded a penalty kick after returning to the video technology, to find that Moreno had committed a foul on Lewandowski inside the area. The Polish striker kicked it, and goalkeeper Ochoa, who saved the kick in the 57th minute, starred in it.

Mexico striker Henry Martin threatened Poland’s goal with an opportunity that almost deceived goalkeeper Chesney, after a shot from Alvarez. Martin tried to change its direction and deceive the goalkeeper to follow it with a header, but Chesney managed to stop it.

In the 80th minute, Alexis Vega tried to hit a powerful ball in front of the Poland penalty area, but his shot went higher than goalkeeper Chesny.

In the 90 + 6 minute, Grigors Krechowiak, the midfielder of the Polish national team, tried to hit a powerful ball from a distance from the goal, but it passed over the crossbar of goalkeeper Ochoa outside the field.