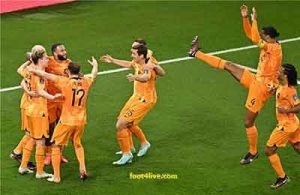 The Netherlands achieved a valuable victory against Senegal, with two goals without a response, at Al-Thumama Stadium, this evening, Monday, at the start of the team’s journey in the Qatar 2022 World Cup.

With that result, the Netherlands raised its score in the first group to 3 points in the lead with Ecuador, while Senegal is at the bottom of the standings with Qatar without a balance of points.

The first danger in the match came in favor of the Netherlands in the fourth minute, alone from Jakbo with Mendy, to prefer passing to Bergwijn next to him, but the ball passed in front of the latter’s feet.

Senegal responded in the ninth minute, with a shot from Dia from outside the penalty area, which went over the crossbar.

The Netherlands returned to the offensive in the 17th minute, rising from Blind to a cross from Jakbo, hitting a header that passed next to the post.

The Netherlands missed a valuable opportunity to open the scoring in the 19th minute, after De Jong received a distinguished through ball from Bergwiss, to separate Mendy, but he slowed down and then tried to dribble the returning Senegal defense before they took the ball away from him.

Van Dyck tried to give the Netherlands the lead in the 27th minute, by rising to a cross from a corner kick, with a header that went wide of the goal.

Senegalese player Diata then hit a ground ball from the edge of the area in the 29th minute, which passed next to the post.

Spali followed him with a ground shot from outside the area in the 34th minute, which went weak in the hands of Nobert.

Bergwis fired a powerful shot from outside the area in the 40th minute, which went just above the crossbar, and the first half ended in a goalless draw.

The Netherlands started the second half strongly, rising from Van Dyck to cross from a corner kick in the 53rd minute, hitting a powerful header just over the crossbar.

Senegal appeared offensively in the 59th minute, with a follow-up from Diata on the far post for a header pass from Guy, hitting a ball that went wide of the goal.

Senegal almost opened the scoring in the 65th minute, after Dia received a distinctive pass inside the area, hitting a powerful ball that the Netherlands goalkeeper shone in stopping it.

Sarr paved a ball for Gay on the border of the area in the 73rd minute, and the latter hit a powerful ball that was blocked by Nobert.

And Senegal continued to crawl towards the Netherlands goal, with a shot from Bamba from inside the area, which went over the crossbar in the 76th minute.

The Netherlands scored a late goal in the 84th minute, after Jakpo rose to a cross from De Jong, taking advantage of a wrong exit from Mendy, to hit a header that entered the net.

Senegal tried to score the equalizer directly in the 86th minute, with a powerful ground strike from Guy from outside the area, Nobert excelled in tackling it.

Jacobs sought to surprise Nobert with a shot from outside the area in the second minute of stoppage time, but his ball went wide of the goal.

Bamba returned to try by rising to a cross from Spali in the fourth minute of stoppage time, hitting a header that went over the crossbar.

The Netherlands added the second goal in the ninth minute of stoppage time, after a shot from Depay, Mendy blocked it, before Klassen followed it up with a shot into the net.