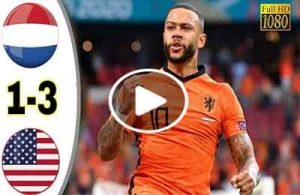 The Netherlands national team continued to make its way in the World Cup (Qatar 2022), and qualified for the quarter-finals today, Saturday, after defeating America (3-1), in the first knockout round match.

The Netherlands’ goals came at the feet of Memphis Depay, Daley Blind and Denzel Dumfries in the minutes (10, 45 + 1, 81), while Haji Wright scored America’s only goal in the 76th minute.

Coach Louis van Gaal, the winner of the Argentina match against Australia, is waiting to meet him in the 8th round, next Friday evening.

The American team almost surprised its Dutch counterpart with an early goal after less than 3 minutes, when a ball reached Pulisic inside the penalty area, but he missed the opportunity, after goalkeeper Nobert brilliantly blocked his shot.

But the Dutch response was more powerful after the Van Gaal battalion launched a quick attack that ended with a cross pass from Dumfries to Depay inside the penalty area, to meet it with a lightning touch, which settled into the net, so that the mills advanced with an early goal.

Depay returned to threaten the goal of American goalkeeper Turner with a powerful shot, but it missed its way and passed out of the field.

The American team continued its attempts at Nobert’s goal, seeking to equalize, but the Dutch goalkeeper withstood again against a powerful shot from Timothy Weah.

And in the last moments of the first half, the Netherlands returned to surprise America with a second goal in the same way, but this time through Blind, who mimicked Depay’s shot in the first goal, after a pass from Dumfries as well.

The beginning of the second half almost witnessed the goal of reducing America through Tim Reem, but he missed the opportunity strangely.

The Netherlands was close to firing a coup de grace at the American team after a cross hit the foot of a defender, accidentally turning into a goal, but goalkeeper Turner’s vigilance prevented it from reaching the net.

McKinney received a silk pass on the borders of the Netherlands penalty area, but he fired a stray shot over the goal, to miss the opportunity to reduce again.

The American goalkeeper brilliantly blocked Depay’s shot from outside the penalty area, turning it into a corner with his fingertips.

Substitute Haji Wright managed to reduce the score for America, after a cross that touched his foot, and the ball jumped into the net in the 76th minute.

But Dumfries dispelled the American dreams after 5 minutes, as he added the third goal for the Dutch by meeting him with a cross from the left side into the net, in the 81st minute.