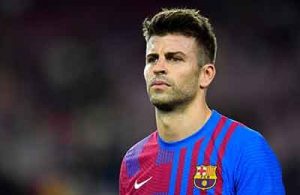 A press report revealed a new leak regarding Gerard Pique’s contract with his club Barcelona.

The same source had published leaks about Lionel Messi’s terms to renew his contract with Barcelona in 2020.

According to El Mundo newspaper, Pique gets with Barcelona the highest salary for a defender in the world, as his fixed wage is 13.6 million euros, in addition to image rights, loyalty bonuses, and other exceptional ones.

It said that Pique had asked for a higher salary than Sergio Ramos, whose annual salary with Real Madrid was 12.5 million euros.

It indicated that the total that Pique receives annually from Barcelona amounts to 28.4 million euros, meaning that his entire contract from the 2017-2018 season, until the end of the current season, amounts to 142 million euros.

And “El Mundo” revealed that Pique caused an internal crisis with Barcelona, ​​because he was the one who produced the film, in which Griezmann announced, not to move to Barca and continue with Atletico Madrid.

the newspaper pointed out that Barcelona accused Pique of causing “serious damage to the club, and the legal services in Barca criticized him for putting his interests before the interests of the club, lacking respect and creating a conflict of interest.”

Barca imposed a penalty on Pique with a 25% deduction from a month’s salary (more than 300,000 euros), but as a result of the players’ strength in that period, the penalty was not applied.