Newcastle deepens Tottenham’s wounds and breaks into the Golden Square 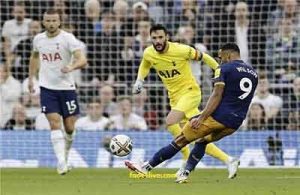 Newcastle United deepened the Tottenham’s Wounds, after incurring a new loss on Sunday, this time at home (1-2), thus continuing its positive results this season and breaking into the semi-finals, in the framework of the 13th round of the English Premier League.

At (Tottenham Hotspur Stadium), the Newcastle players surprised the hosts and entered the break with the advantage of advancing with two goals scored by Calum Wilson and Paraguayan Miguel Almiron in the 31st and 41st minutes, respectively.

Although Tottenham managed to return to the meeting with the aim of reducing the difference in the first minutes of the second half through top scorer Harry Kane, the team did not manage to avoid a new loss in the remainder of the half.

As a result, Spurs fall into the trap of the second loss in a row, after losing last week to Manchester United with a clean double, the third for the London battalion since the beginning of the season, and the first at their stadium.

The balance of the Italian team Antonio Conte stopped at 23 points, keeping him in third place.

On the other hand, the “Magbis” continued to present its strong performances since the beginning of the season, achieving its third victory in the last 5 matches, and the fifth this season.

The team has not received any loss for the seventh match in a row, especially since its fall (2-1) at the hands of Liverpool at the end of last August.

The win raised Newcastle’s tally to 21 points, making it to the golden square (4th place).