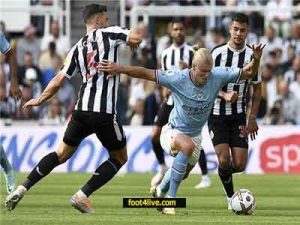 Manchester City was satisfied with a point that put it in second place, two points behind leaders Arsenal, and a goal difference against Leeds United, Tottenham and Brighton, while Newcastle temporarily came fifth with 5 points.

Manchester City coach Pep Guardiola relied on the 4-3-3 method, as John Stones played alongside Nathan Ake deep in the back line, with the support of full-backs Kyle Walker and Joao Cancelo, and Rodri played the role of the center player, and Ilkay Gundogan and Kevin De Bruyne moved in front of him behind the attacking trio of Bernardo Silva, Phil Foden and Erling Haaland.

On the other hand, Newcastle coach Eddie Howe resorted to the 4-3-3 method as well, where the back line of the quartet Kieran Trippier, Fabian Char, Sven Putman and Dan Bourne, and Joe Willock exchanged roles with Bruno Guimaraes and Joelinton in the middle of the field, while Miguel was present. Almiron and Allan Saint-Maximin on the wings, around outright striker Callum Wilson.

Manchester City started the match as a striker, as Foden passed the ball to Rudy, and the Spaniard shot from the outskirts of the penalty area over the goal in the fourth minute.

And soon, City scored the goal in the fifth minute, when Silva made a distinguished technical effort on the right side, before sending a cross that Gundogan received with the first touch, before firing in the second into the net.

From a counterattack, the ball reached Halland, who passed it on the right side towards De Bruyne, and the Belgian international hit a ball towards the near post, which was removed by goalkeeper Nick Pope in the tenth minute.

Newcastle’s first chance came in the 14th minute, when Saint Maximin passed the ball to Wilson, and the latter sent a ball along the goal, which was cut by goalkeeper Ederson before it reached the motivated Almiron.

Bob saved his goal from a goal for City in the 16th minute, when he blocked Foden’s creeping shot after a pass from Gundogan, and Newcastle responded less than a minute later when Almiron shot high in the air after a pass from St. Maximinen.

Newcastle pressed for an equalizer, and Guimaraes passed a through ball to St. Maximin, who got rid of Stones before firing a shot that was brilliantly saved by Ederson.

Newcastle managed to equalize in the 28th minute, when the ball from a counter-attack reached Saint Maximin, who made his way from the left side, before sending a cross that Almiron met from close range into the goal.

Wilson added the second goal for Newcastle in the 39th minute, when he received a pass from the brilliant Saint Maximin, to get rid of the motivation in an easy way before continuing the ball into the net.

In added time of the first half, De Bruyne took a free kick, which Stones headed over Newcastle’s goal.

Cancelo made a dangerous start from the left, before passing to Halland inside the penalty area, and the Norwegian striker hit a crawling ball into the far post in the 52nd minute.

Newcastle scored the third goal in the 54th minute, through a direct free kick, which Trippier took over the human wall to wobbly into the net.

But City quickly woke up from his slumber, scoring a goal in the 60th minute, following a cross from the right, which caused a darbka. Rodri winked the ball to Halland, who put it in the goal from close range.

Halland missed the opportunity to equalize in the minute when goalkeeper Bob saved himself, before De Bruyne passed a distinctive through ball, and Silva put Silva in front of the goal, to score the equalizer in the 64th minute.

Trippier got the red card in the 73rd minute, after detaining De Bruyne, but the referee retracted it after using video technology, to be satisfied with issuing the yellow card.

Halland missed the opportunity to score the winning goal in the 78th minute, when he shot over the goal from a comfortable position, after a cut ball from defender Born.

The remaining minutes passed with Newcastle tightening its defense, and the referee calculated 9 minutes as added time in which the net was not shaken.