Newcastle impose Manchester United to a draw at Old Trafford 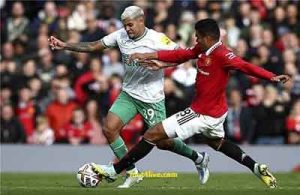 Manchester United fell to a draw against its guest Newcastle, in the match hosted by Old Trafford on Sunday evening, as part of English Premier League ,11th round .

Manchester United’s first attempt came in the third minute, with a shot from Fred from the edge of the area, which went wide of the goal.

Manchester United reappeared in the 13th minute, with a curved shot from Sancho from the edge of the penalty area, which passed next to the post.

Newcastle appeared offensive for the first time in the 16th minute, with Jolinton rising from a corner kick, shooting a weak header that De Gea grabbed.

Then Murphy penetrated from the depth in the 17th minute, hitting a weak ground ball from the borders of the area, which De Gea grabbed easily.

Manchester United responded with a shot from outside the area through Anthony in the 18th minute, which went wide of the goal.

United almost opened the scoring in the 38th minute, after Sancho passed a magical intersection to Anthony inside the area, and the latter hit a powerful ball that Bob starred in stopping.

Fernandez rose to a cross from Dalot from the right side in the third minute of stoppage time, hitting a header that went over the crossbar, ending the first half with a goalless draw.

Newcastle started the second half strongly, with a ground shot from Wilson from inside the area in the 46th minute, which just passed next to the post.

United formed the first attacking threat in the second half in the 61st minute, with a ground shot from Anthony from inside the area, which Bob grabbed.

After a period of calm, Newcastle attacked again in the 80th minute, with a powerful shot from Almiron from the edge of the penalty area, but his shot went wide of the goal.

Substitute Rashford tried to snatch the three points for United, by executing a free kick in the 82nd minute, hitting a direct ball that went over the crossbar.

Manchester missed a real chance to score in the 88th minute, after Fernandes sent a magical intersection to Rashford, to be unique to Bob and succeeded in evading it and passing the ball to Fred, who shot strangely next to the post.

In the fifth minute of stoppage time, Casemiro sent a magical cross to Rashford, who is free of censorship inside the area, to hit a header that just passed next to the post, and the match ended in a goalless draw between the two teams.