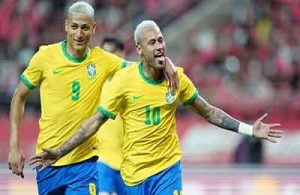 Hit in the ankle against Serbia (2-0), Neymar finally returned to Brazil’s lineup on Monday against South Korea (4-1). A relief for the Brazilian star, scared of missing the rest of the competition, as he explained after the match. The playmaker also wanted to send a message to Pelé.
Neymar, who scored on Monday for his return with Brazil against South Korea (4-1), revealed that he “cried all night” after the ankle injury which deprived him of two matches of the 2022 World Cup “I was very scared, because I really believed in myself after my good start to the season. Getting injured like that was very painful,” the Paris SG star striker told TV Globo.
“Ney” suffered an ankle sprain in Brazil’s first game, against Serbia (2-0 victory), and was unable to play against Serbia (1-0) and Cameroon (1-0 loss ). “I cried all night after, but everything turned out fine in the end. It was worth staying until 11:00 a.m. the next day with the physio, then every day after,” he added.

Pelé, Ronaldo and him

Against South Korea, Neymar, 30, started and scored the second goal on penalty in the victory that qualified Brazil for the quarter-finals. He thus became the third Seleçao player to score in three different World Cups, after Pelé and Ronaldo. “It is a great pride to reach records that I would never have imagined,” he said.

Neymar has not been spared injury in his first two tournament appearances. In 2014, at home, he injured his back in the quarter-finals and was unable to play in the 7-1 rout of Germany in the semis. In 2018, the number 10 of the Seleçao had just returned from a foot injury. He was only a shadow of himself in Russia and Brazil lost in the quarterfinals against Belgium (2-1).
“This time it’s time to go further. We dream of the title, of course, but we have to take it step by step. There are three games left, we are ready and focused to win this trophy,” he said.

Neymar also wanted to send a message of support to Pelé, suffering from cancer and hospitalized for a week. “It’s hard to talk about that, but I wish him the best, that he recovers as soon as possible. I hope we brought him comfort with our victory,” said the striker.
At the end of the round of 16 against South Korea, Neymar and his teammates carried a banner with the inscription “Pelé!” and a photo of the “King” during his third world title, in 1970.