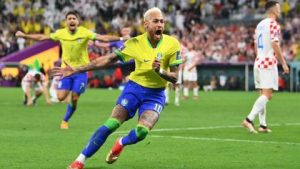 This Friday, Neymar equaled Pelé as the Brazilian team’s top scorer with 77 goals. But the PSG star set the tone by signing an exceptional goal in extra time against Croatia, while the Seleçao stumbled on the Croatian block. His goal was not enough, however, since the selection for the five World Cups was finally eliminated.

Brazil needed a saviour. But that wasn’t enough. This Friday, Brazil was eliminated in the round of 16 by Croatia on penalties while Neymar had nevertheless scored a goal as historic as it was magnificent. Author of the opener in extra time, the Brazilian star equaled the total of the legend Pelé with 77 goals in selection. The two men now share the honorary title of the team’s top scorer at the five World Cups. But the main thing is elsewhere for the Ney this Friday.

Little in sight in this match before this goal, Neymar signed one of the collective goals of this World Cup. At 30 meters, he first called for a relay with Rodrygo to continue to accelerate in the axis. Then, it was Lucas Paqueta who was asked to enter the surface. Launched at full speed, the PSG star was able to avoid contact with Borna Sosa to get around Dominik Livakovic before concluding, in force, in a tight angle (105 + 1st). An action that summarizes the technical virtuosity of Neymar.

But this magical action will ultimately only have an anecdotal place in the story. That was finally marked by heroic Croats, who came back up at the very end of extra time by Bruno Petkovic (116th) before winning on penalties (1-1, 4-2 on t.a.b).