Neymar: I love the Real Madrid defender.. Pedri reminds me of Iniesta 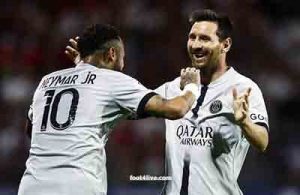 The Brazilian Neymar, the Paris Saint-Germain striker, spoke about the adaptation extent of the Argentine star, Lionel Messi, with the French team.

Neymar told DAZN: “I’ve known Leo for a long time, and that change was difficult, as he was in Barcelona for many years… But now everything has changed, for his family as well.”

He added: “The truth is that it was difficult, but the situation has become better now. He feels more at home.”

And he added, “What I want from him is for him to enjoy himself, to enjoy ourselves. We know that there are a lot of difficult things ahead, but we can do it.”

Neymar talked about some players, including Real Madrid’s defender Antonio Rudiger, who said about him: “I love him. He is a defender who frightens you, is very strong and big.”

And about Pedri, the middle of the Barcelona field, he replied: “I love him too, he reminds me of Iniesta.”