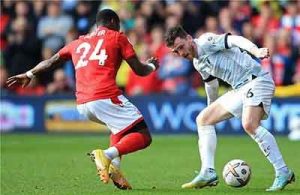 Taiyo Onye scored the only goal of the match in the 55th minute.

Liverpool’s balance froze at 16 points, and remained threatened with losing seventh place, while Nottingham Forest left the bottom of the standings, raising its score to 9 points in 19th and penultimate place.

Nottingham achieved its second victory in the Premier League this season, and its first since beating West Ham in the second round, on 14 August.

Liverpool reached their opponent’s goal at intervals, but the attempts of Salah, Firmino and Carvalho lacked sufficient ferocity to score.

As for Virgil van Dijk, he missed the most dangerous opportunities very strangely, as he preferred to pass with his head instead of hitting the net a few meters from the goal.

The first half ended in a goalless draw, and the second started with a recurring scenario, negative control and a very slow rhythm from Liverpool.

The shock came after 10 minutes, when Taiwo Onyi scored the first goal for Nottingham Forest, taking advantage of the poor control of the two defenders, Van Dyck and Joe Gomez.

Nottingham almost scored a knockout with a second goal, but Gibbs White missed an opportunity after a quick rebound on the Liverpool goal.

Lever coach Jurgen Klopp moved to revitalize the ranks by bringing in Jordan Henderson and Alexander Arnold in the place of Milner and Fabio Carvalho.

Alisson saved the situation again, by blocking a dangerous attempt from Brennan Johnson after a breakthrough for Senegalese Sheikh Kouyate, and Curtis Jones responded with a shot in the arms of goalkeeper Dean Henderson.

Sheikh Kouyate again manipulated the right front of Liverpool, and presented another gift, which this time was lost by his colleague, Yates, with a weak shot in Alisson’s arms.

Klopp threw a new card to save what could be saved, as Alex Chamberlain replaced Roberto Firmino, and Sheikh Kouyate came out to replace Mangala.

The two goalkeepers wore the gauntlet of mastery in the last minutes, as Dean Henderson saved a dangerous header from Arnold, and Alisson responded by blocking a complete one-on-one from Yates in the 85th minute.

The referee counted 5 minutes of added time, during which Van Dyck missed two chances, one of which was removed by goalkeeper Dean Henderson with great skill, before he removed another attempt from Mohamed Salah, so that the referee blew his whistle, announcing a valuable victory for the owners of the land.