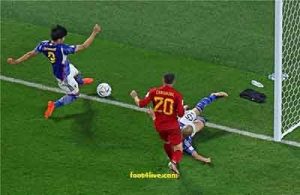 FIFA issued an official statement regarding the authenticity of Japan’s questionable goal against Spain, during the two teams’ confrontation, yesterday, Thursday, at the conclusion of the group stage of the “Qatar 2022” World Cup finals.

The second goal raised many question marks. Where TV replays show that the ball crossed the goal line before the Japanese striker passed it to his colleague to score goalkeeper Unai Simon.

And FIFA published on their official account on the social networking site “Twitter”: “The second goal of Japan against Spain was examined via video assist technology, to determine whether the ball had gone out of the field.”

The statement added: “Video referees used goal-line camera images to check whether the ball was still partially on the line or not.”

The statement concluded: “Other cameras may display misleading images, but according to the available evidence, the entire ball was not out of the field.”