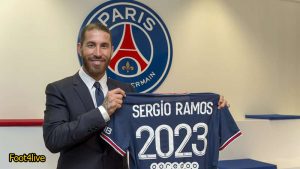 The PSG club welcomed, through its official account on Twitter, the arrival of Ramos, announcing the signing of a contract that extends for two seasons, until the summer of 2023.

Ramos joined the Paris team on a free transfer after the expiration of his contract with Real Madrid, and the player will keep his distinctive shirt, which bears No. 4.

Ramos left Real Madrid after 16 years in the Spanish team, with whom he achieved 22 titles during this period, after a difference over the terms of contract renewal with the Meringue management.