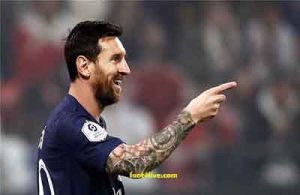 Paris Saint-Germain snatched a precious victory outside their stadium beating Olympique Lyonnais, 1-0, on Sunday evening, at the top of Ligue 1 eighth round.

Lionel Messi scored the game’s only goal in the 5th minute to kill two birds with one stone.

With this victory, PSG are alone at the top of the French Ligue 1 with 22 points, taking advantage of the stumble of their rivals Olympique de Marseille (20 points).

As for Olympique Lyonnais, they disappointed their supporters, and suffered their third loss in Ligue 1 this season, to freeze their score at 13 points in sixth place.

The Parisian giant didn’t give his opponent a chance to breathe but instead stunned him with an early goal scored by Messi with a clever touch after an accepted gift from Neymar Jr.

PSG came close to digging into Lyon’s injuries, but Messi, Mbappe and Fabian Ruiz missed other attempts very close to the goal.

The hosts overcame the early shock, and gradually got into the game mood, threatening Gianluigi Donnarumma’s goal with more than one dangerous attempt.

However, the attacking trio of Olympique Lyonnais Ekambi, Moussa Dembele and Alexandre Lacazette, lacked concentration in the finishing touches.

Amid the enthusiasm and attacking rush, Neymar Jr. surprised everyone with a long shot, which was narrowly missed by the Lyon keeper.

The Parisian team almost repeated the shock scenario of the start, as Messi missed a certain chance 50 seconds after the start of the second half.

Olympique Lyonnais goalkeeper Lopez was also vigilant in countering other attempts from Neymar Jr and Messi, while Mbappe was the least active link in the Paris attack.

The fate of the meeting remaining in suspense, Christophe Galtier therefore moved to revitalize the ranks by bringing in substitutes Mokili and Vitina in place of Fabian Ruiz and Marco Verratti, to try to renew the blood of the center.

As for Lyon, they were without attacking fangs, and the trio did not threaten Dembele, Lacazette and Ekambi, and alternative Ryan Sharqi failed to provide the required footprint or addition.

5 minutes from the end of the initial time, Carlos Soler participated in place of Neymar, to try to rest the Brazilian star.

The referee counted 4 minutes as additional time, during which Sergio Ramos scored after following up on a free kick from Messi, which was saved by goalkeeper Lopez.

However, the veteran Spanish defender’s joy was not complete as he fell into the offside trap, and the encounter ended with the visitors winning with just one goal that came early.