Photo: Messi embarrasses Pochettino and refuses to shake his hand 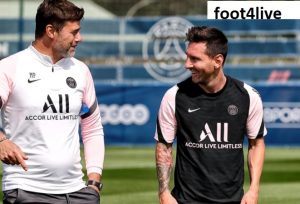 Photo: Messi embarrasses Pochettino and refuses to shake his hand

Lionel Messi, the star of Paris Saint-Germain, embarrassed his coach, Mauricio Pochettino, during the match against Olympique Lyon, today, Sunday, within the summit of the sixth round of the French League.

That’s when Pochettino decided, within the 75th minute, to incorporate Moroccan player Achraf Hakimi rather than Messi.

After Leo left the sector , Pochettino visited greet with him, but Argentina star refused to increase his hand, and spoke some words expressing his objection to his replacement, apparently.

Messi left the sector and therefore the result indicates a 1-1 draw, as Lucas Paqueta advanced to the visitors within the 54th minute, and Neymar Jr. equalized from a penalty kick, within the 66th minute.

Messi joined Saint-Germain during the last summer Mercato, during a free transfer deal, after the expiration of his contract together with his former club Barcelona.