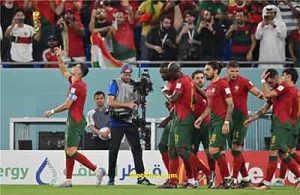 The Portuguese national team defeated its Ghanaian counterpart, 3-2, this evening, Thursday, at the “974” stadium, in the Qatar 2022 World Cup, group stage’s first round .

Portugal’s goals was scored by Cristiano Ronaldo in the 65th minute, Joao Felix in the 78th minute and Rafael Leao in the 80th minute, while Ghana’s Andre Ayew scored in the 73rd minute and Osman Bockari in the 89th minute.

The Portuguese national team scored the first 3 points to top the group, benefiting from South Korea’s goalless draw with Uruguay, while the Ghanaian national team remained without credit at the bottom of the standings.

The match began, under pressure from Portugal, and Ronaldo received a through ball deep in the penalty area, but goalkeeper Lawrence came ahead of him and grabbed the ball in the 10th minute.

Ronaldo received a cross from the left side through Guerrero inside the penalty area, and hit a header, but it passed by Ghana’s goal in the 13th minute.

Ronaldo scored the lead goal for his country in the 31st minute, but the match referee canceled it due to a foul on the captain of Portugal against defender Dijko before scoring.

Portugal’s Bernardo Silva scored a ball that was easily caught by goalkeeper Lawrence Atti in the 36th minute, and the first half ended in a goalless draw.

The first explicit threat to the Ghana national team came in the 55th minute, with a kick-off from Muhammad Quddus from the midfield, where he hit a creeping ball that passed by the left post.

The referee awarded a penalty kick in favor of Portugal in the 62nd minute, following a collision between Mohamed Salisu, Ghanaian defender, and Cristiano Ronaldo.

Cristiano Ronaldo rushed to pay, and succeeded in scoring the goal for Portugal in the 65th minute, as he shot to the right of goalkeeper Lawrence Ati.

Mohamed Quddous, the Ghanaian national team player, tried to shoot the ball from outside the penalty area, but Diogo Costa blocked the ball twice in the 71st minute.

Andre Ayew scored the equalizer in the 73rd minute, when he received a cross ball inside the penalty area from his colleague Mohamed Quddous and put the ball into the Portuguese net.

Joao Felix put Portugal back in the lead in the 78th minute, when he received a pass from Fernandez, drove until he reached the penalty area and shot to the right of Lawrence Atti.

The Portuguese bombardment did not stop at Ghana’s goal, as Bruno passed a ball towards substitute Rafael Liao, who shot a creeping ball past goalkeeper Lawrence Ati.

Osman Bukari scored his country’s second goal in the 89th minute, when he received a cross from the left side, and hit a header under the right of goalkeeper Diogo Costa.

The Ghana national team almost snatched the equalizer in the last seconds after a catastrophic mistake by goalkeeper Costa, had it not been for the intervention of the defense, so that the Portuguese national team achieved 3 valuable points.