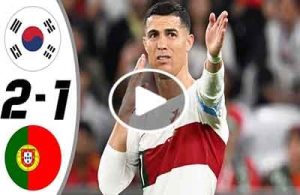 The South Korean national team achieved a historic victory against Portugal, 2-1, this evening, Friday, at the end of the group stage of the “Qatar 2022” World Cup finals.

The goals for South Korea were scored by Kim Young-joon and Hwang Hee-chan in the two minutes (27 and 91), while Ricardo Horta scored for Portugal in the 5th minute.

With this victory, the Korean team raised its tally to 4 points in second place, to settle qualification behind leaders Portugal, who have 6 points.
Early goal.. quick response

The match began with Portuguese pressure, as Pepe the defensive lineman sent a ball forward and reached Dalot, who received and passed a cross towards Ricard Horta, who slotted it into the net, giving Portugal the lead in the 5th minute.

Joao Cancelo, the left back of Portugal, set off, dodged the South Korean defense and hit a ball that was saved by the goalkeeper in the 14th minute.

Young Joon Kim succeeded in scoring the equalizing goal for South Korea in the 27th minute, from a corner kick, and the ball reached him inside the penalty area, and Young hit the bottom left of goalkeeper Diogo Costa.

Cristiano Ronaldo, the captain of Portugal, received a pass deep in the South Korean defense, and set off and hit the ball in the face of the foot, had it not been for the intervention of the goalkeeper who saved it, before the referee indicated the presence of offside, in the 29th minute.

Vitinha, the Portugal national team player, hit a ball, which was saved by the South Korean goalkeeper without any problem in the 35th minute.

Heung-min Son, South Korea’s national team player, shot a ball from outside the penalty area, which reached easily into the arms of Portugal goalkeeper Diogo Costa in the 40th minute.

Vitinia, the Portuguese national team player, sent a missile shot from outside the penalty area, which was blocked by the South Korean goalkeeper, to bounce back in front of Cristiano Ronaldo, who headed a ball wide of the goal with great care, in the 42nd minute.

The first half ended in a positive tie with a goal for the same.

With the start of the second half, the Portuguese team did not show the usual pressure, and did not threaten Korea’s goal.

Portugal coach Fernando Santos decided to withdraw Ronaldo and replace him with Andre Silva in the 65th minute.

Portugal goalkeeper Diogo Costa played an important role in blocking shots from South Korean players Son and Hwang before him.

South Korean players demanded a penalty kick, due to a handball on Joao Cancelo inside the penalty area, in the 71st minute, but the referee refused to count anything.

The referee awarded a direct free kick to South Korea, which was executed by Son, who hit the left post of goalkeeper Diogo Costa in the 73rd minute.

And Hwang Hee-chan succeeded in scoring the deadly victory goal for his country, South Korea, in the 91st minute, as he received a through pass from Son inside the penalty area and hit a ground ball past Diogo Costa.

South Korean players retreated to the defense in the remaining minutes of the match, after they achieved the surprise and cut off the ticket to the World Cup final price.