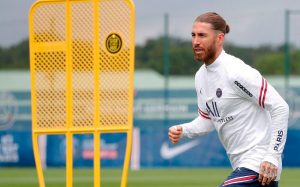 Officially Saint-Germain decides the fate of Ramos from the Super match!

The French Cup champions, Saint-Germain, will face Lille, the league champion in the previous season, in the French Super Cup, next Sunday.

Saint-Germain issued a statement on its official website, saying: “Sergio is on his way to gradually recovering from a calf muscle injury he suffered in training last weekend.”

“Ramos is expected to return to training within a week,” the statement added.

Ramos joined Saint-Germain this summer, coming from Real Madrid on a free transfer, after Florentine Perez, president of the Royal Club, refused to renew his contract with the team.

Paris Saint-Germain hopes to provide Ramos with the desired addition, and help the team win the Champions League, a competition in which the Spanish player has great experience.

Watch all your matches on our best website “foot4live.com” for football streaming on 2021, watch your prefered Team with good quality and with slow network, watch all your matches for free with us and you are not pushed to pay anything all News and live streams are for free,all what you need to do is only to share the website with your friends,colleagues.