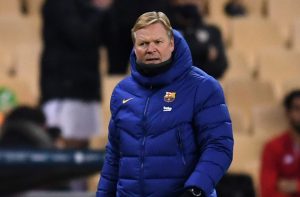 Ronald Koeman: The Gimnastica Quartet showed the positives of Barcelona

Dutch coach Ronald Koeman, coach of Barcelona, ​​​​expressed his happiness with the team’s performance in the first match during the preparatory round for the season, during which the Blaugrana swept its guest Jimnastic 4-0, yesterday, Wednesday.

At the Johan Cruyff Arena, and in light of the large number of absences, due to the participation of some players in the Tokyo Olympics or the lack of annual leave yet, Dutch coach Ronald Koeman pushed a large number of reserve team players.

“The important thing is that everyone played 45 minutes, which is important on a physical level,” Koeman said, during comments reported by the Spanish newspaper “Marca”, after the match.

Ronald Koeman said: “We controlled and got a good result, and the match leaves positive things for us.”

another reaction of Ronald Koeman when he said, “I see my players are doing well, they have come back well, and we trained hard this morning. We have to be better physically, and with two different teams participating during the match, everyone was able to show their abilities.”

Koeman continued: “It was strange for me that there were fans, but thank God, I love that the audience is present and the players also love it, the fans help us.”

And he concluded: “On Saturday we will have more players, we have less time to train together, and in the German camp we will play good matches, against high-level competitors, where we can extract good results.”

source: kooora.com
watch all your matches on our website football live streaming with name foot4live.