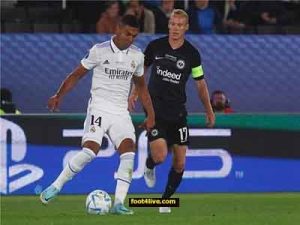 Real Madrid announced today, Friday, that it had reached an agreement with Manchester United regarding the transfer of Brazilian midfielder Casemiro to the ranks of the Red Devils.

In a statement on its official website, the Royal expressed its gratitude to Casemiro, describing him as “part of the club’s legend.”

Real Madrid reviewed the record of tournaments in which the Brazilian international was crowned with the Meringue shirt, which reached 18 titles, 5 in the Champions League, 3 in the Club World Cup, and the same in the European Super, La Liga and the Spanish Super, along with a single title in the King’s Cup.

Casemiro was also individually crowned as the best player in the European Super, which Real won a few days ago, and is in the list of candidates to win the Ballon d’Or this year.

Al-Meringi indicated that he will bid farewell to Casemiro, next Monday, in the presence of club president Florentino Perez.

You may read : Casemiro meets Ancelotti for Manchester United