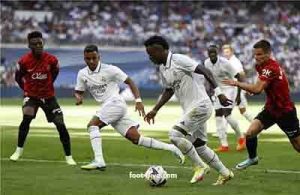 Real Madrid achieved a wide victory (4-1), during the match against Real Mallorca, on Sunday evening, in the fifth round of the La Liga championship, in the Meringue stronghold, “Santiago Bernabeu”.

Real Madrid’s goals were scored by Fede Valverde in the minute (45 +3), Vinicius Junior (72), Rodrygo (89) and Antonio Rudiger (90 +3), while Real Mallorca’s only goal was scored by Fedat Muriqui in the 35th minute.

With this victory, Real Madrid regains the top spot in the La Liga standings with 15 points, two points behind runner-up Barcelona, ​​while Mallorca’s balance froze at 5 points in thirteenth place.

The match began, with a threat from the guests, as Mallorca striker Muriqui shot a powerful ball that was saved by Real Madrid goalkeeper Thibaut Courtois in the 1 minute.

The response came from Real Madrid in the 5th minute, with a shot from Meringue midfielder Dani Ceballos on the edge of the penalty area, which was blocked by Mallorca’s goalkeeper Rajkovic twice.

Real Madrid midfielder Toni Kroos shot a ball on the edge of the penalty area, which passed next to the left post of Mallorca’s goal in the 14th minute.

Rodrygo went inside the Real Mallorca penalty area, and hit a ground ball that goalkeeper Rajkovic caught in the 27th minute.

Real Mallorca’s Vedat Muriqi scored the lead in the 35th minute, with an indirect free kick by Lee, who sent a curved cross into the area, to rise and header into Courtois’s net.

Vinicius Junior sent a missile ball from outside the area, which touched the outer net of Mallorca’s goal in the 44th minute.

The first half ended with a 1-1 draw.

With the beginning of the second half, Real Madrid’s Lucas Vazquez hit a powerful ball that passed the right post of Real Mallorca’s goal in the 61st minute.

Vinicius Junior succeeded in adding the second goal for Real Madrid in the 72nd minute, with a purely Brazilian goal, as he exchanged passes with his compatriot Rodrigo Joyce, before Vinicius put the ball down the left of the Mallorca goalkeeper.

Real Madrid completely controlled the ball, and on the other hand was the defensive solidity of Mallorca, which hindered the Meringue players from threatening his own goal, but the Brazilian Rodrigo succeeded in adding the third goal with a distinguished individual effort.

The young Brazilian started again and manipulated the Mallorca defense, before hitting the ball to the right of goalkeeper Rajkovic in the 89th minute.

The royal goals party did not end there, as a free kick by Toni Kroos from outside the area reached defender Antonio Rudiger to score with a strong header and add the fourth goal in the minute (90 + 3), and secures the three points for the royal.