Real Madrid compete with PSG for a super defensive deal 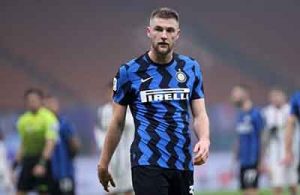 Slovakian Milan Skriniar, Inter Milan defender, is at Real Madrid’s table during the next summer Mercato.

Skriniar’s contract with Inter expires at the end of the current season, which gives him the right to negotiate and sign with a new club, starting next January.

According to the Spanish newspaper, Mundo Deportivo, Real Madrid has turned its attention to Skriniar and aims to sign him through a free deal.

The Spanish newspaper indicated that Skriniar has already made the decision to leave Inter, and will not sign a new contract.

It explained that Paris Saint-Germain will try again to sign Skriniar next January, but Inter will not allow his departure for less than 70 million euros.

Paris had previously tried to include Skriniar in the summer, but Inter suspended the deal, after the failure to sign Gleason Bremer, who moved to Juventus.