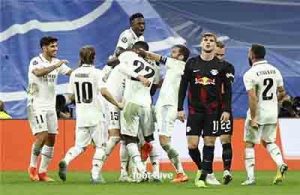 Real Madrid continued its victorious march, with an important victory over its German guest, Leipzig (2-0), on Wednesday evening, in the second round of the group stage of the European Champions League, in the Meringue stronghold “Santiago Bernabeu”.

Real Madrid’s goals were scored by Fede Valverde in the 80th minute and Marco Asensio in the 90+2 minute.

With this victory, Real Madrid raised its score to 6 points at the top of the group, while Leipzig’s balance froze without points in the last place.

The match started with pressure from the guests, as Christopher Nkunku received a ball deep into the Real Madrid defense, and hit a powerful ball that was saved by goalkeeper Thibaut Courtois and turned it into the corner in the 6th minute.

Leipzig striker Nkunko called for a penalty kick in the 11th minute, after he interfered with defender Nacho in the penalty area, but the match referee refused to award anything.

Real Madrid midfielder Luka Modric passed a ball to his colleague Rodrigo Goes inside the penalty area, and the latter hit a ball that went past the left post of Leipzig’s goal in the 16th minute.

Real Madrid goalkeeper Thibaut Courtois saved a shot from inside the area, from Leipzig striker Timo Werner in the 31st minute.

Luka Modric, the Real Madrid midfielder, dribbled the Leipzig defense, and fired a ball from outside the area, which passed near the left post in the 41st minute, to end the first half with a goalless draw.

With the beginning of the second half, Nkunko passed a ball to Werner deep in the Real Madrid penalty area, and the German aimed it, but goalkeeper Thibaut Courtois saved in the 50th minute.

And the match referee awarded a direct free kick to Real Madrid, on the edge of the penalty area, to be executed by young Rodrigo Joyce, who hit the top of Leipzig’s goal in the 62nd minute.

Real Madrid midfielder Fede Valverde passed a ball inside the area to his colleague Vinicius Junior, who shot, had it not been for goalkeeper Gulache, to bounce the ball in front of Asensio, who hit a lob that hit the outside net of the German team’s goal in the 72nd minute.

Fede Valverde scored the goal for Real Madrid in the 80th minute, as Vinicius crossed him from the left side, received and evaded the defense before placing the ball under the right of goalkeeper Gulache.

And the match referee awarded an indirect free kick for Real Madrid from outside the area, carried out by Toni Kroos, who passed a cross to Marco Asensio, who aimed a missile ball far to the left of goalkeeper Gulache, in the minute (90 + 2).

The Meringue players maintained their lead in the remaining minutes, securing 3 valuable points in the title holder’s campaign.