Real Madrid has set its sights on a new striker! 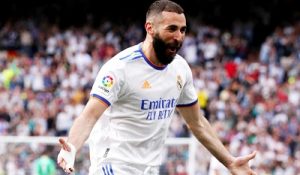 Real Madrid has set its sights on a new striker, to be a replacement for French Karim Benzema next season.

Real Madrid announced the departure of Spanish striker Borja Mayoral to Getafe and is also looking for a way out for Mariano Diaz.

According to the Spanish newspaper AS, Real Madrid is considering signing its former striker, Raul de Tomas, the current Espanyol player.

The newspaper pointed out:

De Thomas has more than one offer, but he is waiting for the signal from Real Madrid.

Additionally, the initial price of De Thomas, who has a contract with Espanyol until June 2026, is 75 million euros, which represents the value of the penalty clause in his contract.

This comes despite speculation that he could leave for around 25 or 30 million euros, given the differences between him and the coaching staff.

You may like to read: Cristiano Ronaldo news today: Dissatisfied the United fans

Do you think Real Madrid will sign with De Thomas! and is he a good replacement of Karim Benzima?

I would like to hear your answers in the comment below and we will be glade to respond you there!